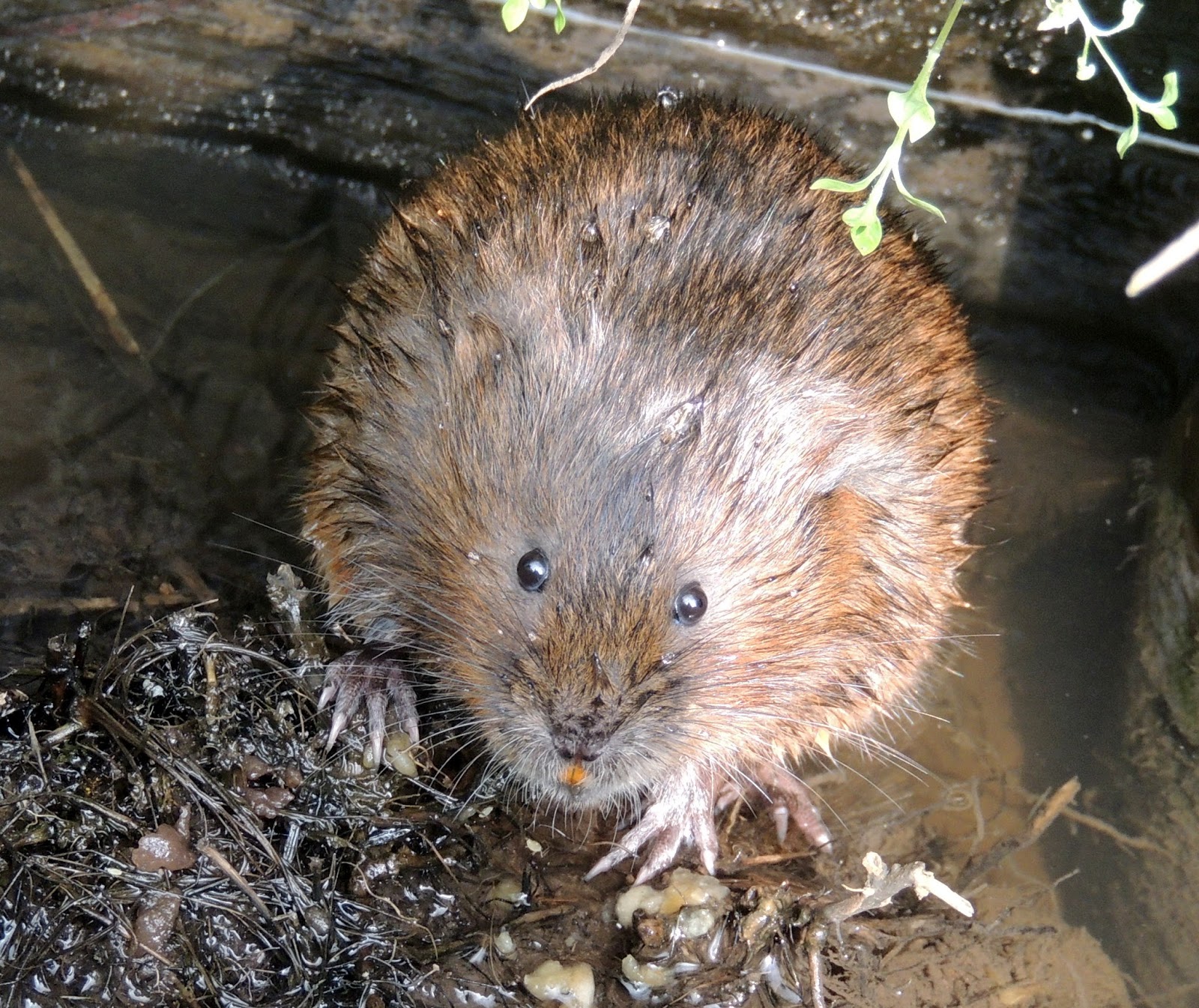 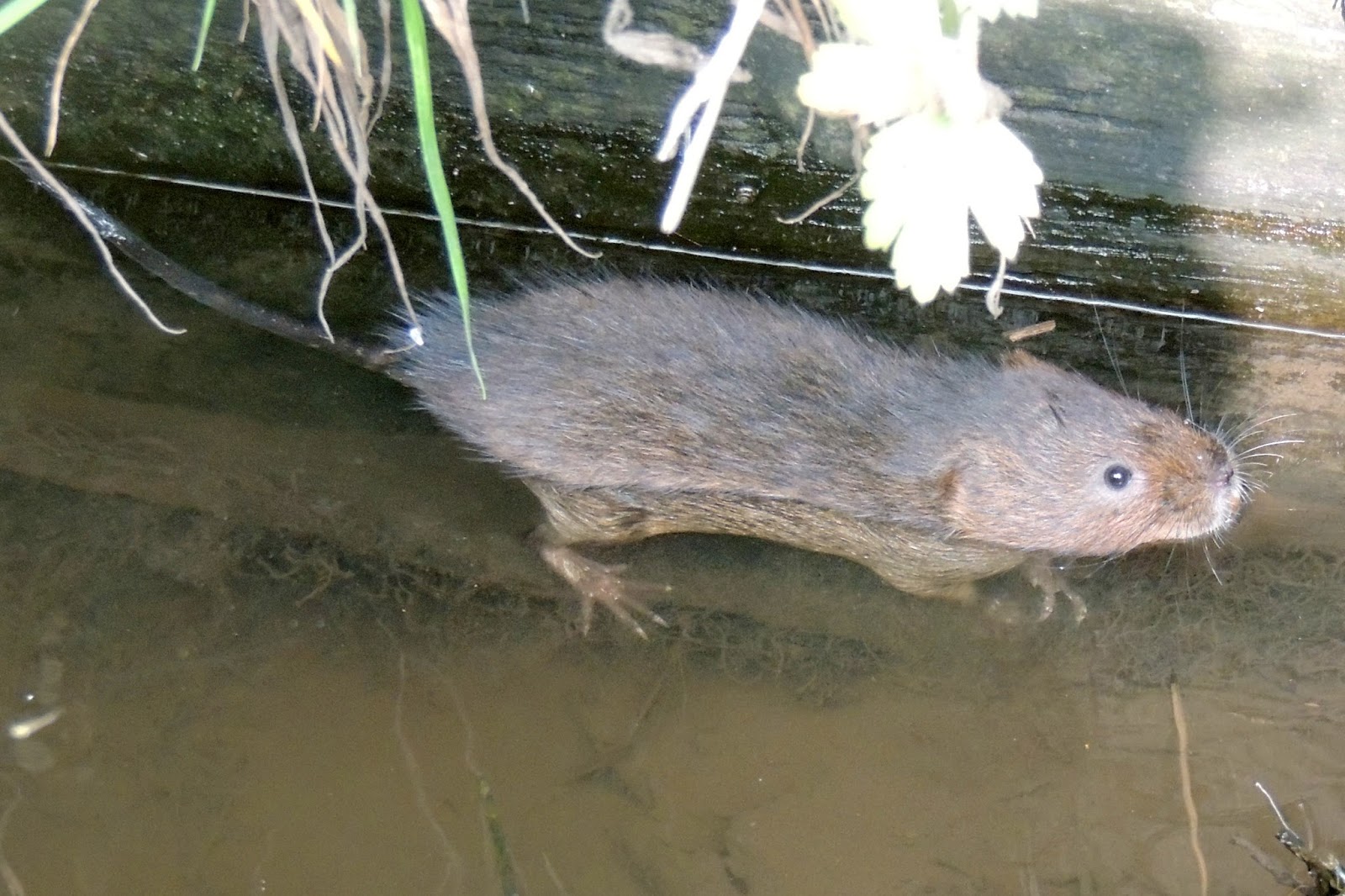 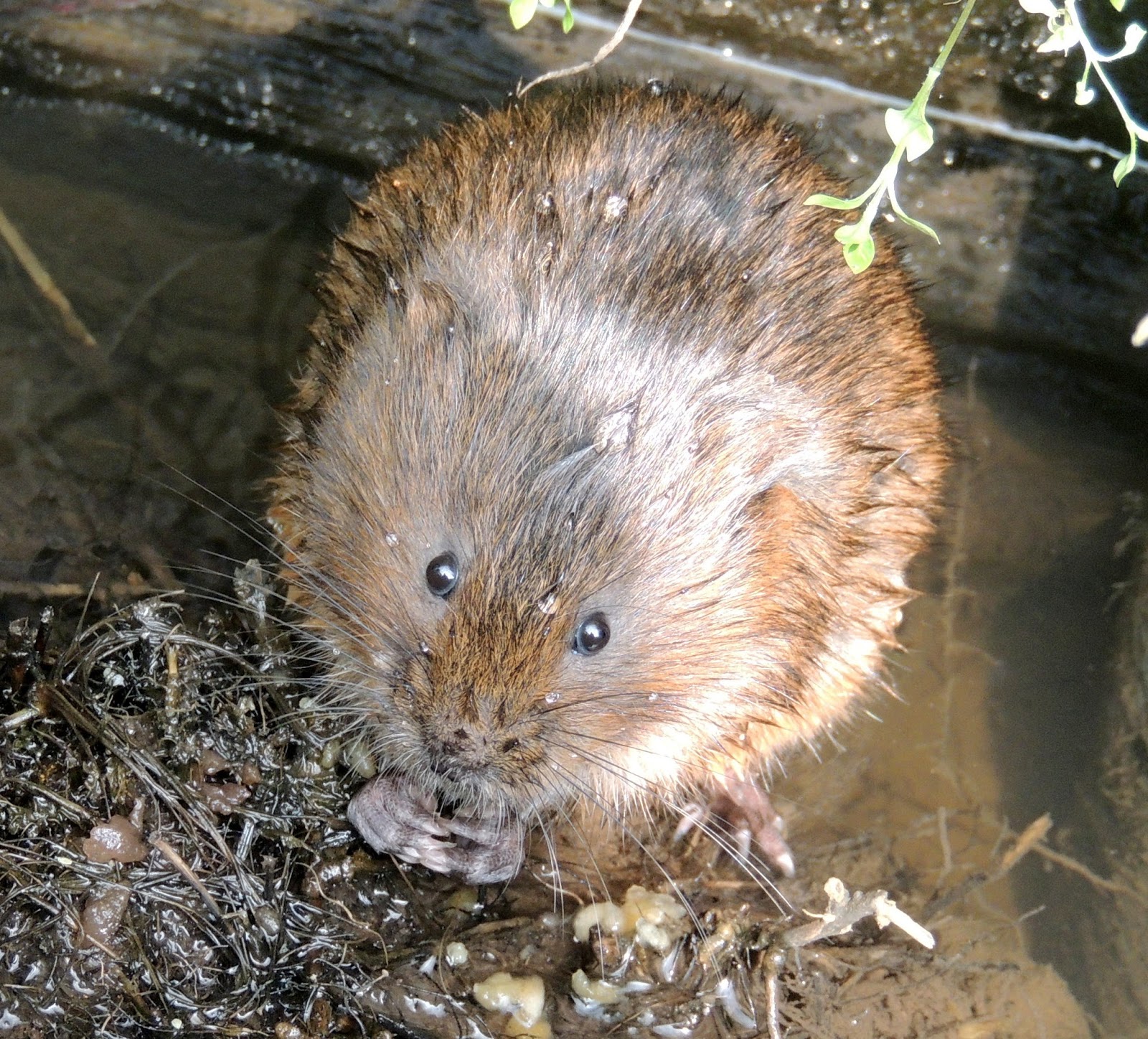 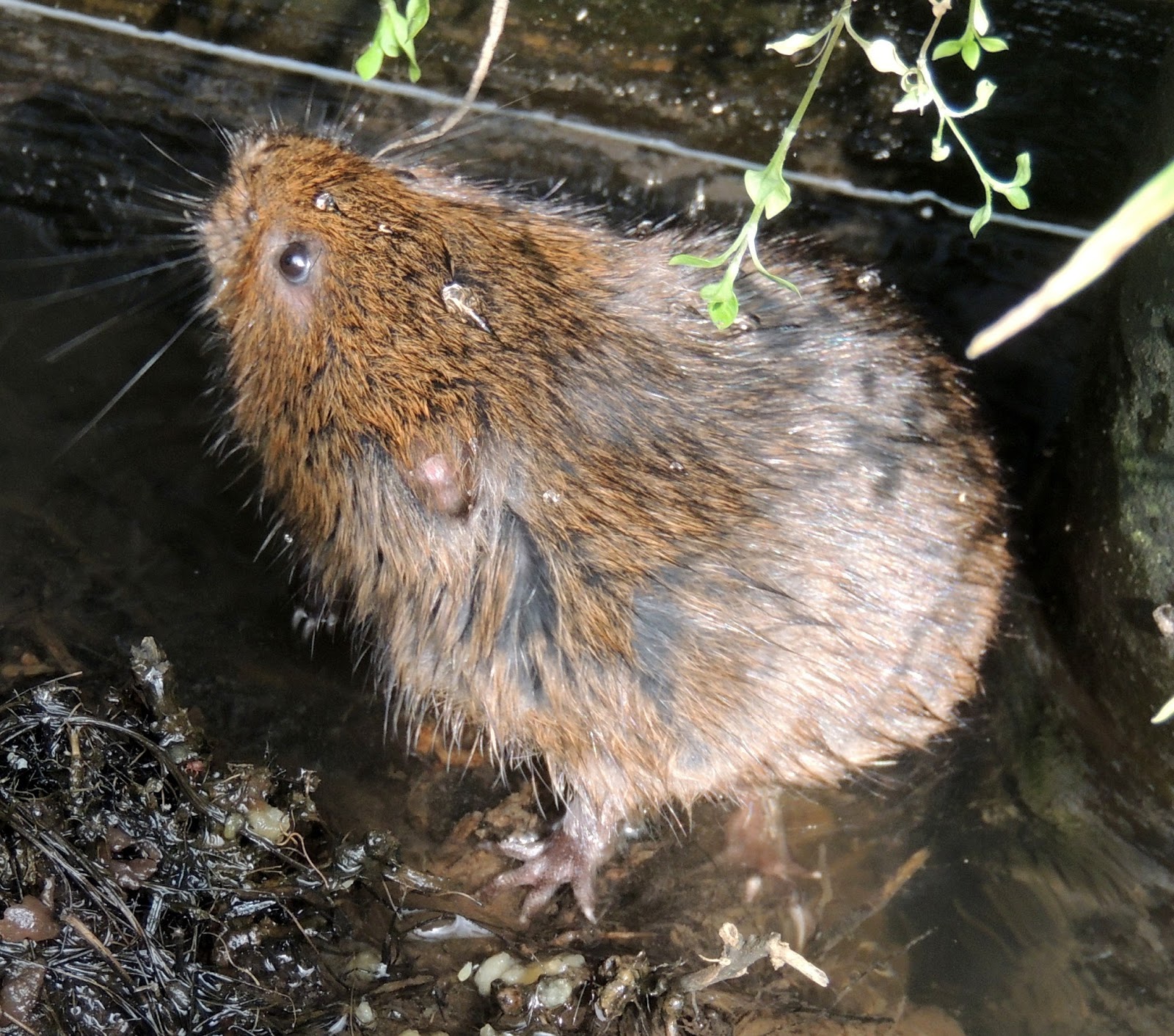 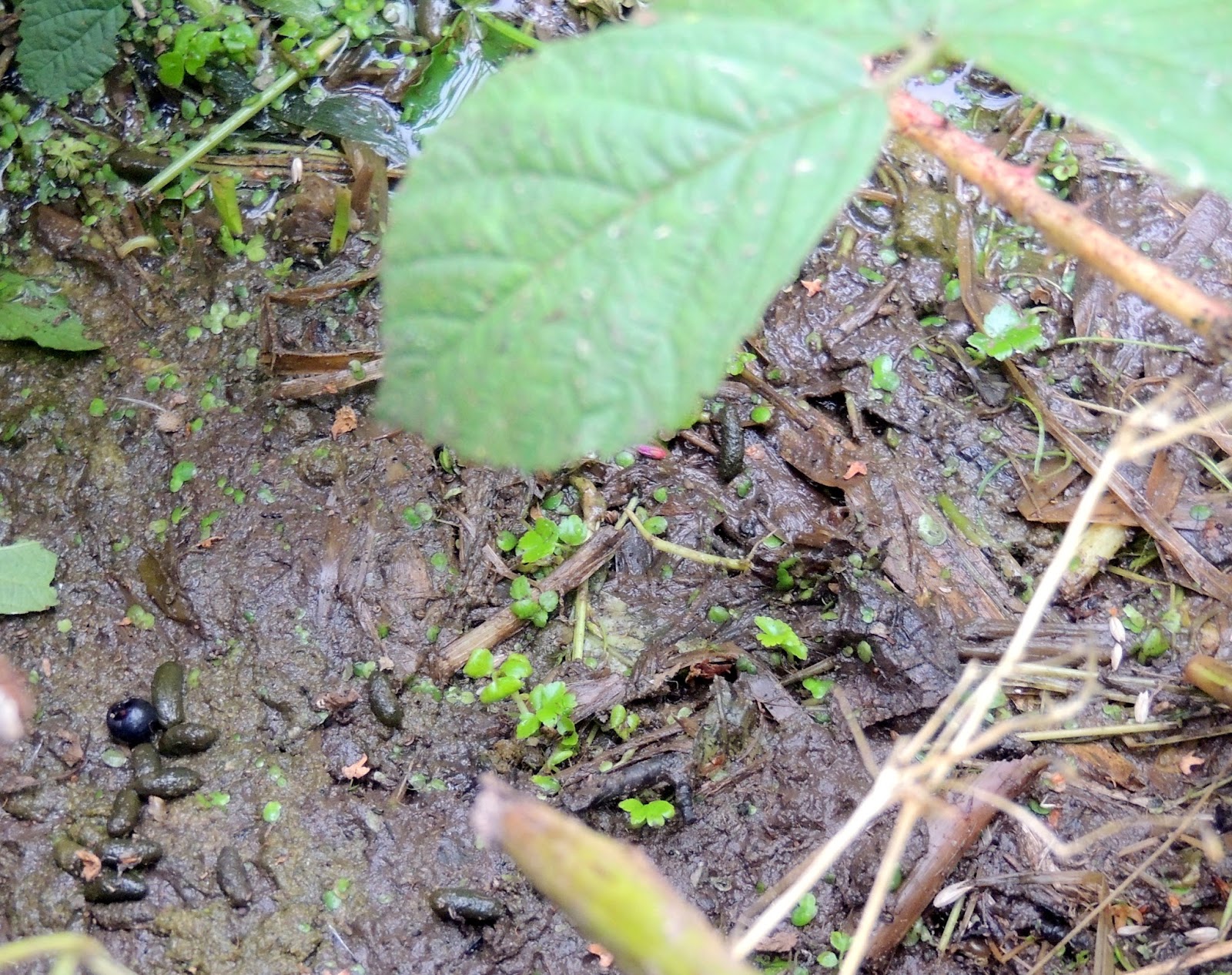 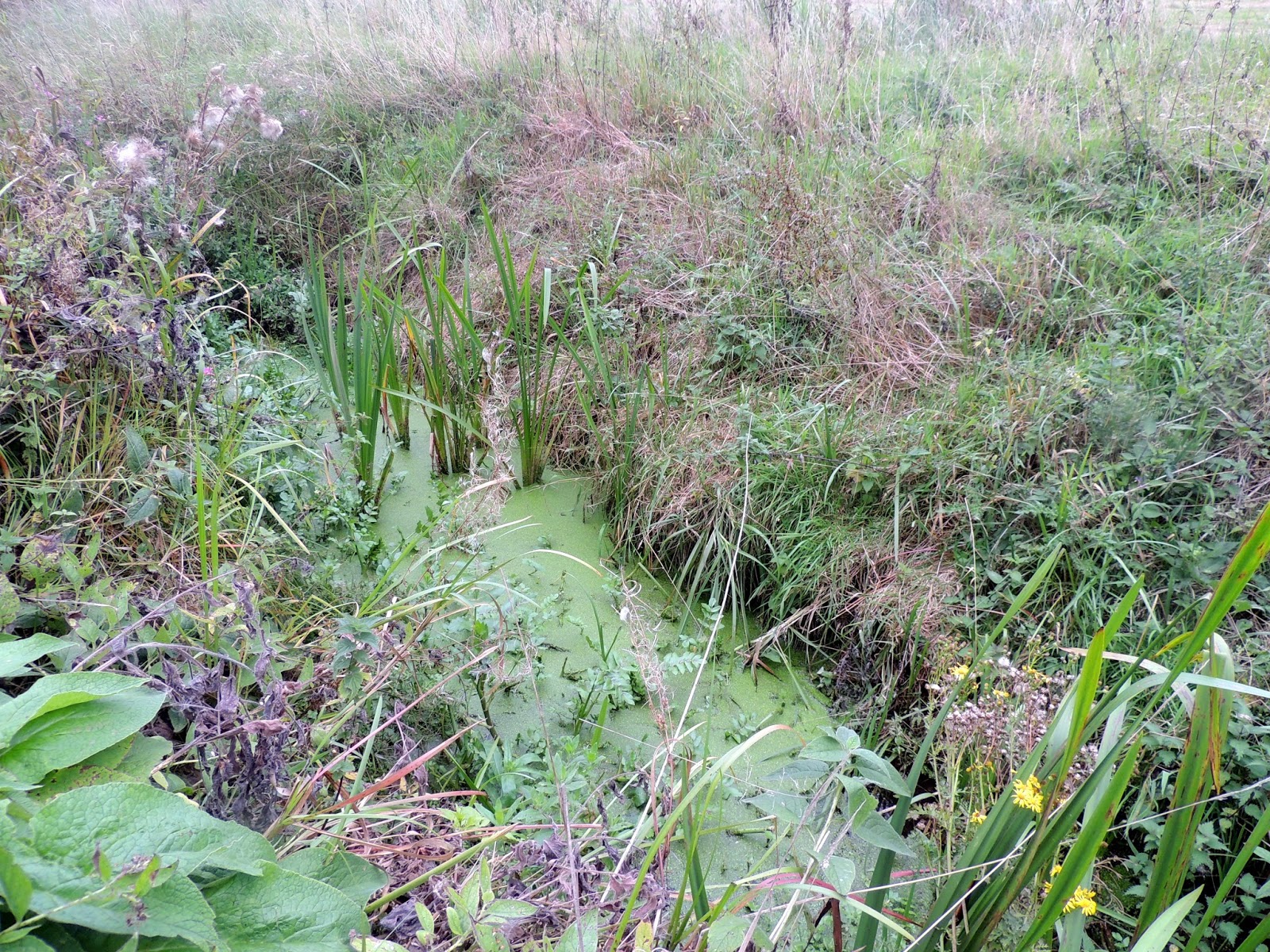 Droppings in the ditch near Railwayman's Cottage (by Homebase) 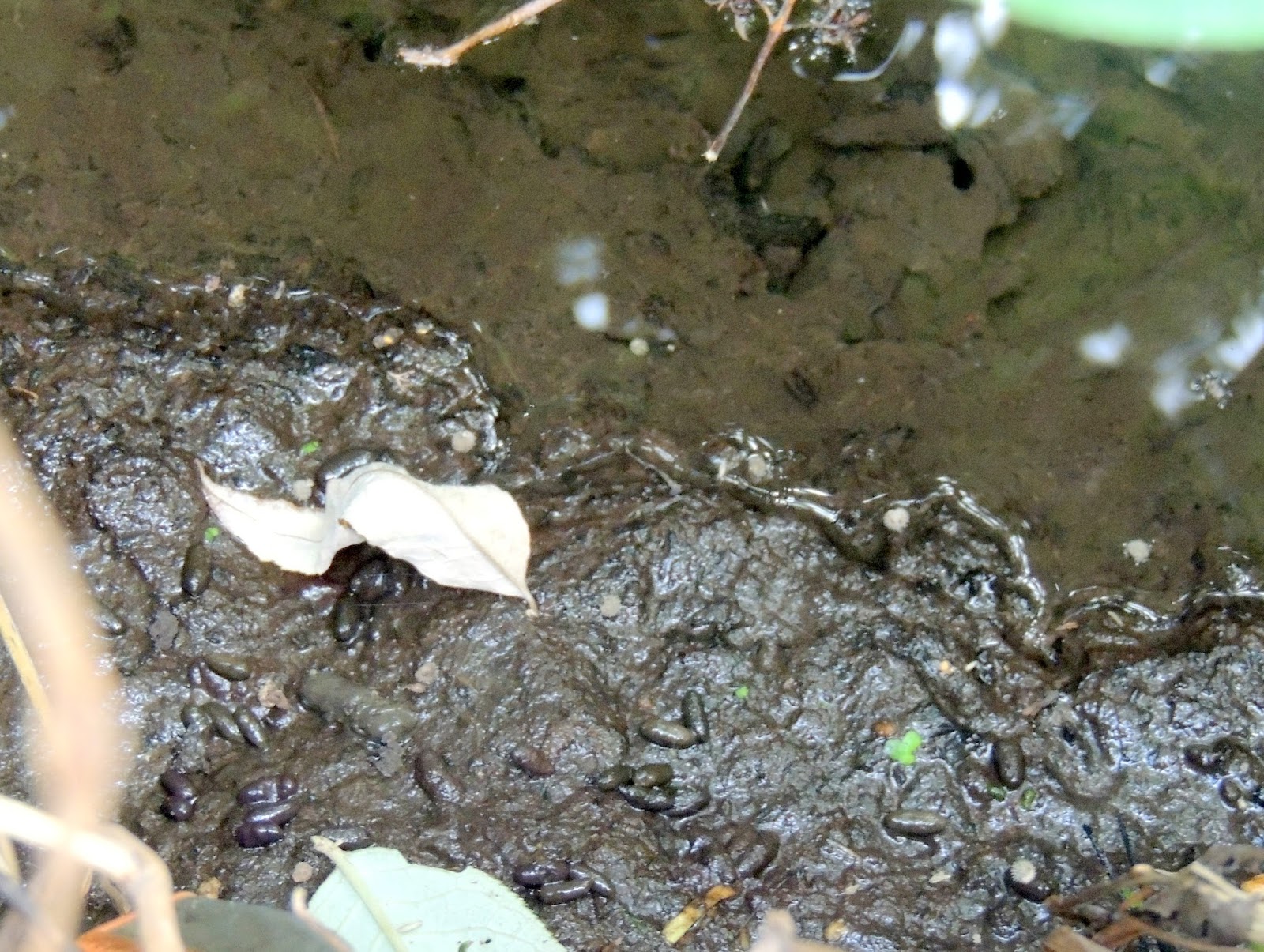 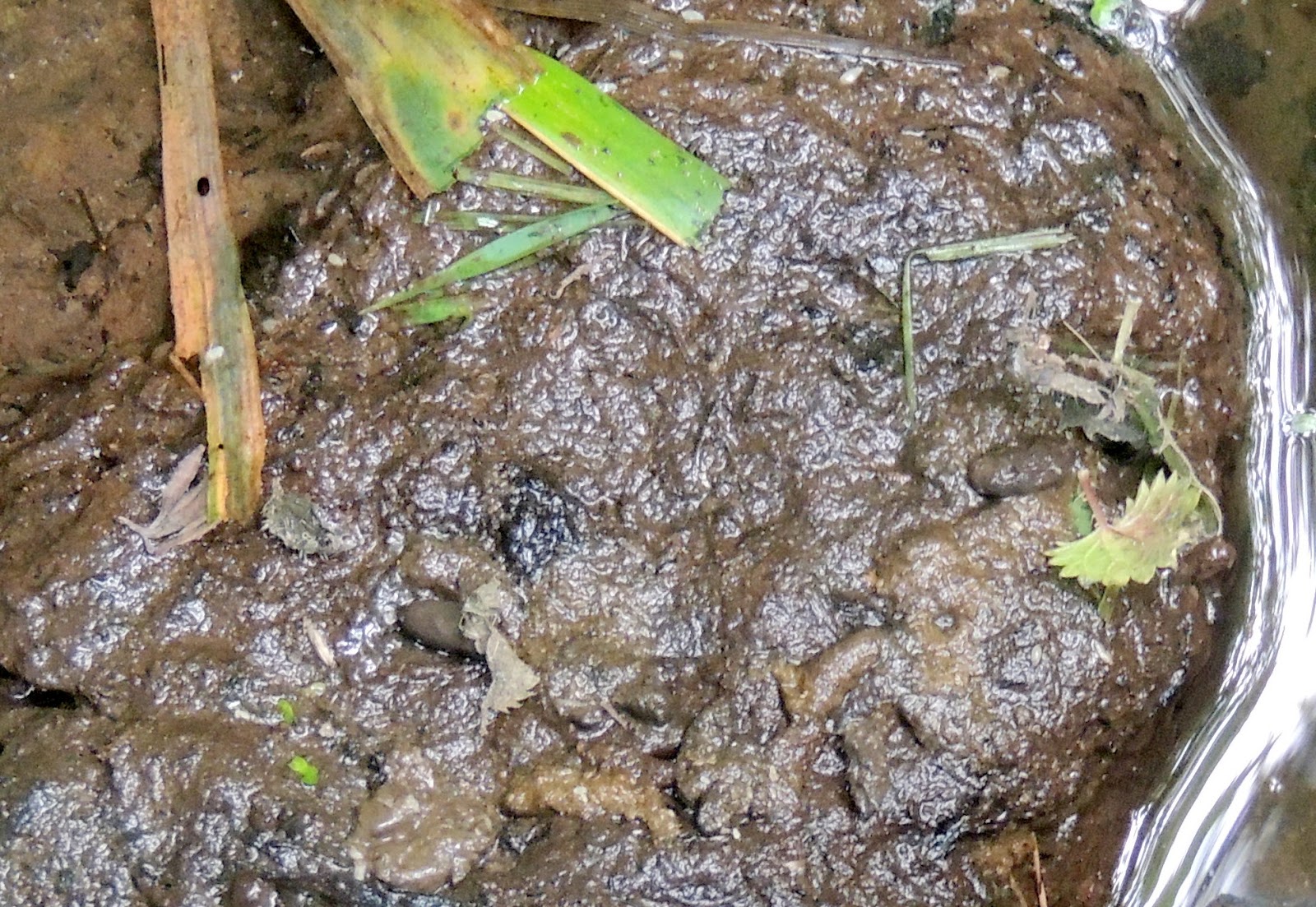 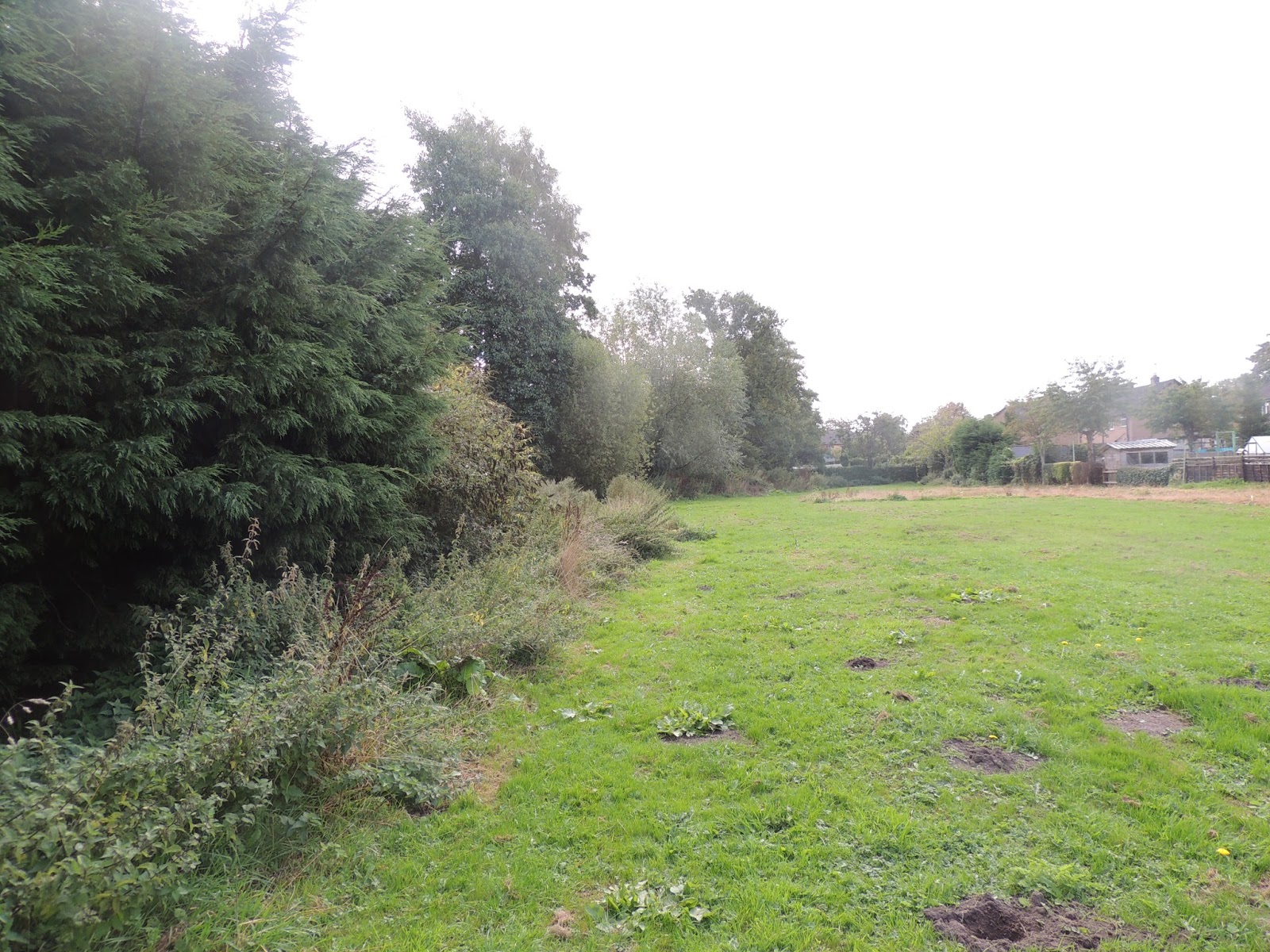 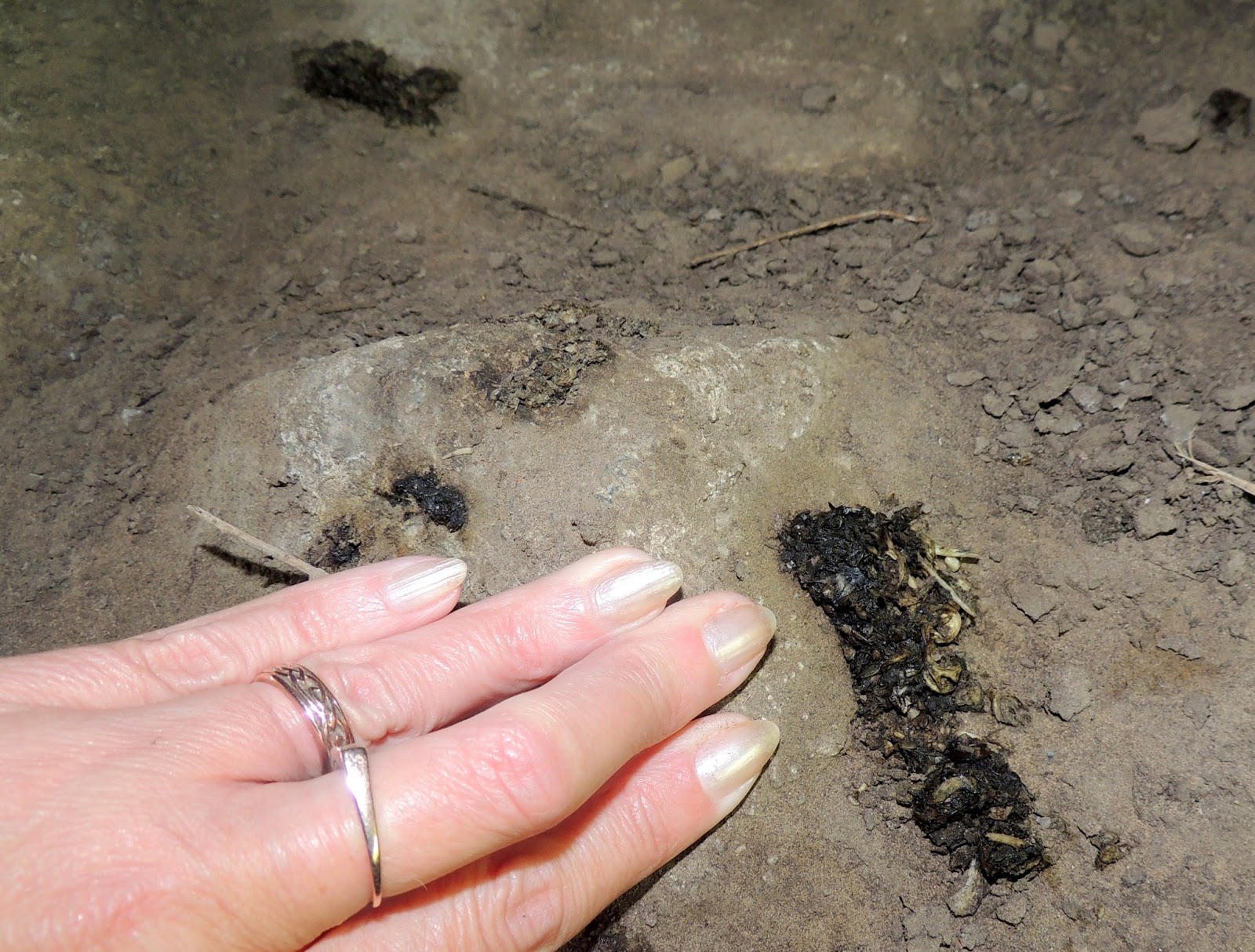 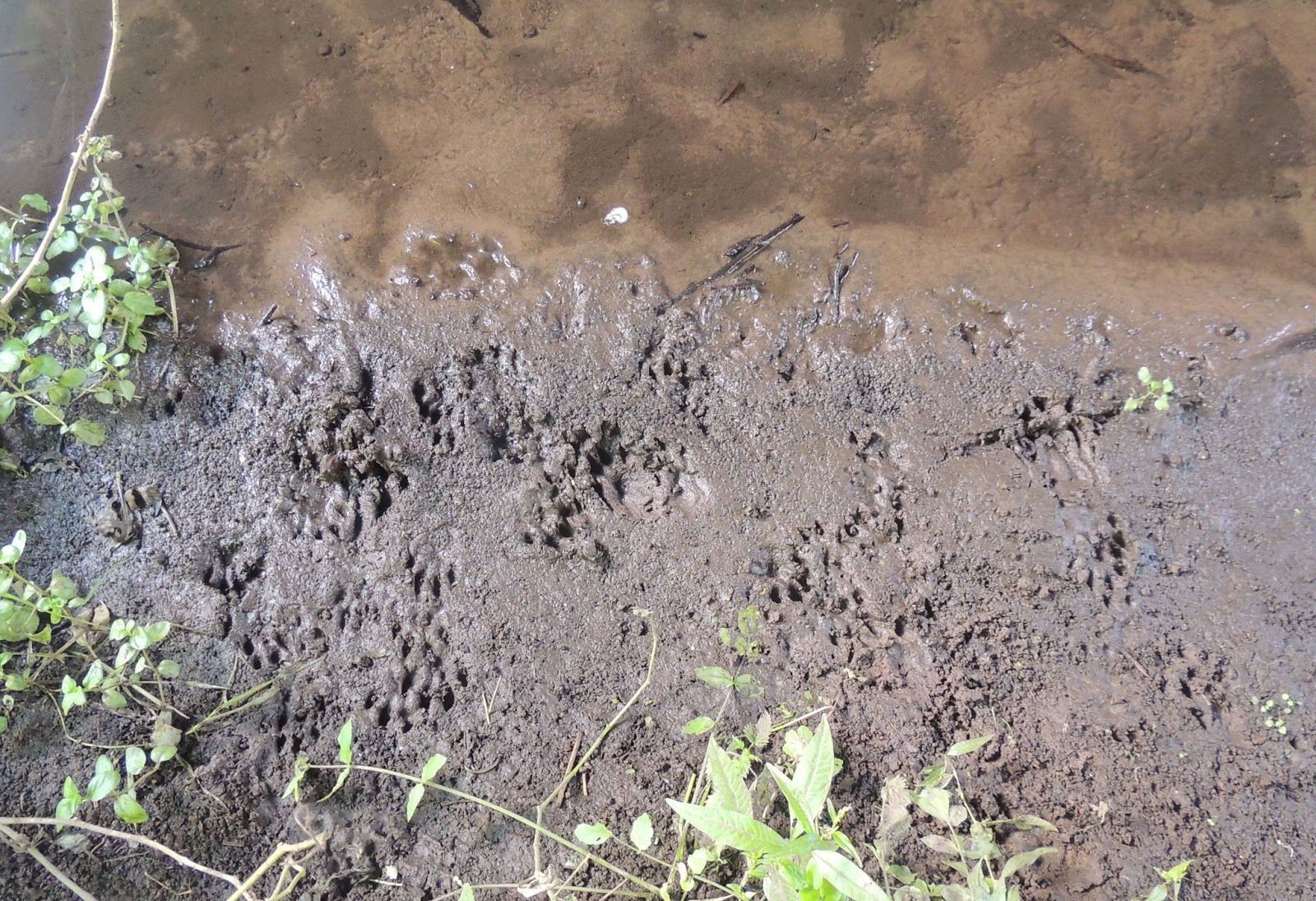 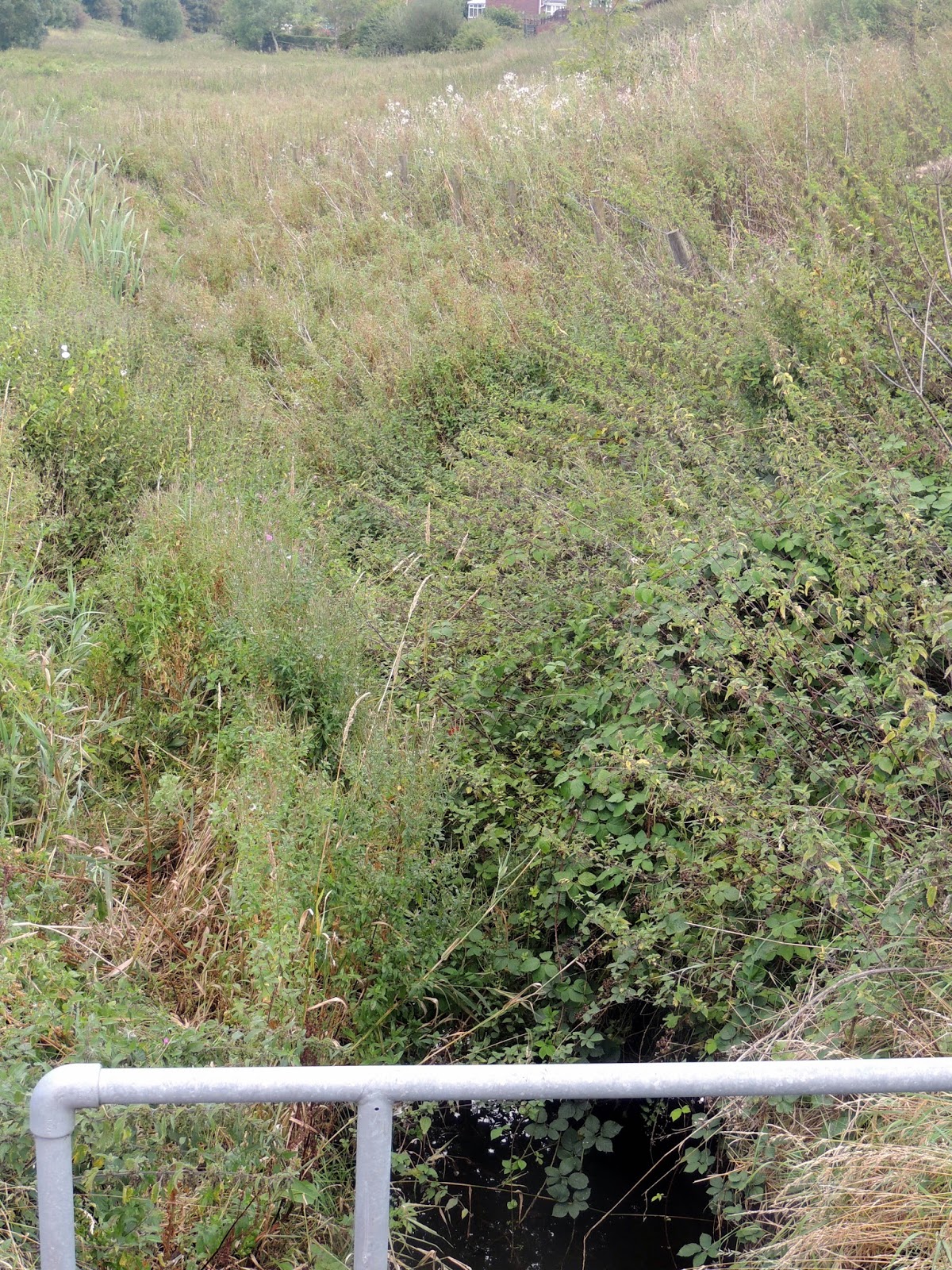 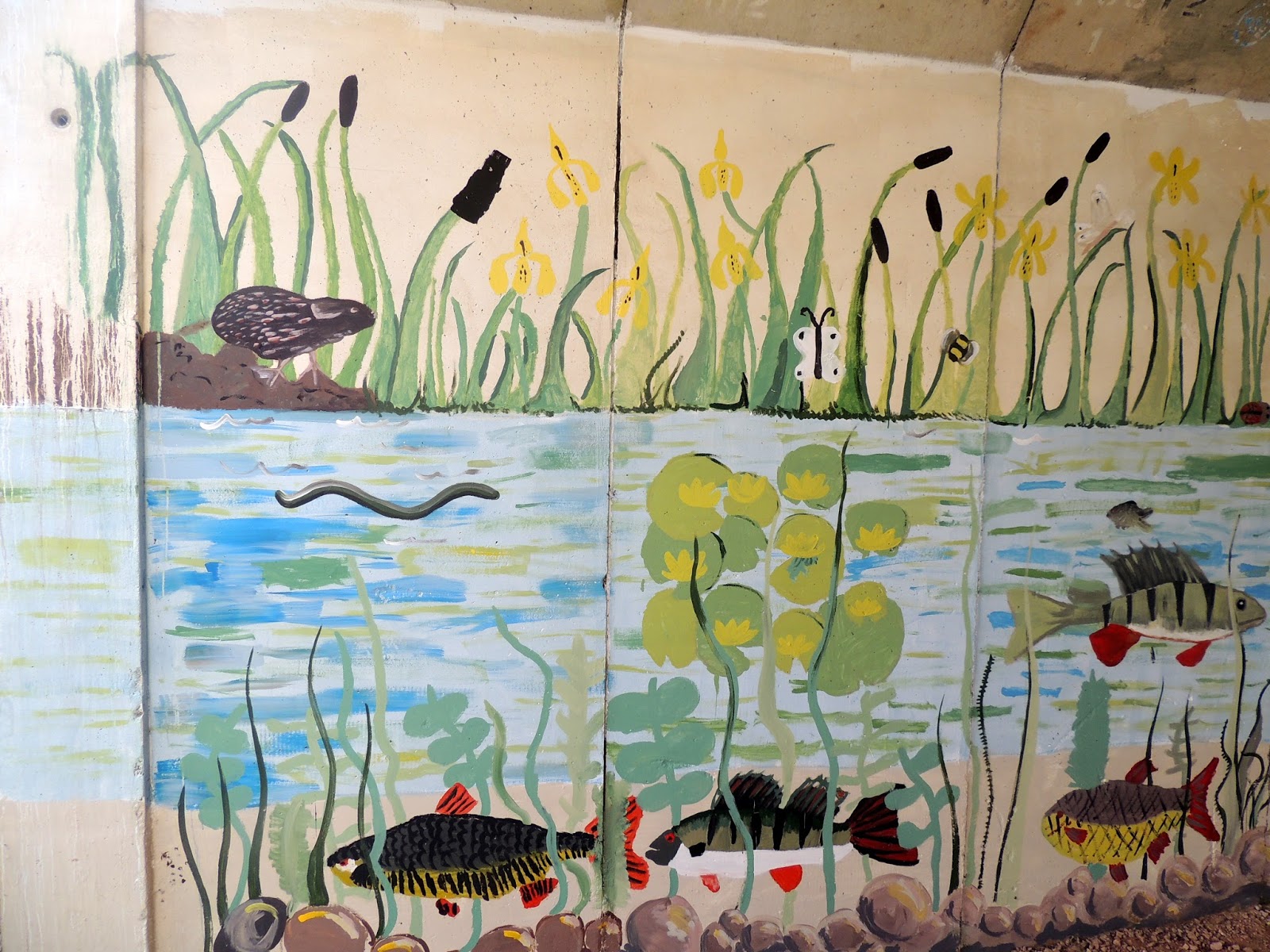 Nice mural by the canal!

I never see much after October, so these may be the last vole photos of 2014. However, the colonies mostly appear to be holding their own. There's some activity at Edward German Drive (though perhaps not as much as in previous years), while the voles at Railwayman's Cottage are thriving. I'm afraid I can't tell what's happening at the country park as the vegetation's so thick I can't get near the banks. There's good otter presence, though, so fingers crossed the voles are also doing OK.

Meanwhile a big cheer is in order for the Environment Agency who have done a detailed study of the Staggs Brook as it goes through town so that they can manage the banks for flood risk without in any way harming the water voles. It's a brilliant effort. I'd say the signs are hopeful for Spring 2015.
Posted by Kate at 03:20

I've been checking our river voles this week and a prominent log that has been in use as a latrine all summer now isn't. Could that be cause for concern? I wondered whether perhaps it meant one particular vole is no more but the colony is still thriving? I found fresh poo in other latrines all along the river. Lovely pics, as always. I shall miss seeing your voles until next year :-)

The demise of one latrine spot isn't necessarily bad news. It could just be that the breeding season has finished for that particular animal.

There may still be video clips on the blog for a while - I'll see what I get!

My last water vole of the year was October 14th last year. That was after many regular sightings all through the summer and early autumn.

However this year, after lots of multiple sightings from March to late June, it all dropped off and went much quieter - and I've only been aware of 2 individuals, from occasional sightings in the last few weeks - and nothing at all since August 31st. (That was a great sighting though - I followed a swimming vole for well over 100, maybe 150 metres - they can certainly shift when they want to, though it did have one or two stop-offs as well). I tend not to see latrines, as all the voley goings-on are on the protected far bank - though I did find one with binoculars once.

Fingers crossed for survival into 2015. Both ends of the 500 - 600m long watercourse/'ditch' are culverted, and I think it does eventually connect to the main River Cam (nothing particularly helpful on any maps though). I don't know how isolated this small colony is, or whether some intrepid individuals come and go, via the underground part of the watercourse.....

I don't know if anyone's done research into how far under a culvert a water vole is prepared to travel. Wildlife corridors are as crucial in protecting colonies as looking after the colonies themselves, because there has to be a meta-population to keep the gene pool strong.

Yes, I wondered about such issues too - but, the water voles presumably found their way there in the first place, rather than being introduced..? I think there has been a w-v 'presence' there for about 20 years.

There seem to be no other aquatic connections, or other logical ways they would have reached that ditch. I'd love to know if they do ever venture down the culvert - I supposed they'd have to be trapped and then 'tagged' and released..

However, the possible isolation of the colony and gene pool issues was certainly something I thought about (along with theories about various predators) when the population seemed to crash around July...

They certainly do travel overland, though I'm not sure how far. Professor Xavier Lambin at Aberdeen University was doing some work on it, I think. It would be very helpful to conservationists if we had more info on this. Two years ago I collected water vole droppings and sent them to The Vincent Trust to be analysed for DNA - that was part of research into which colonies were interbreeding. But I never heard the results.