The re-fit went well, then. 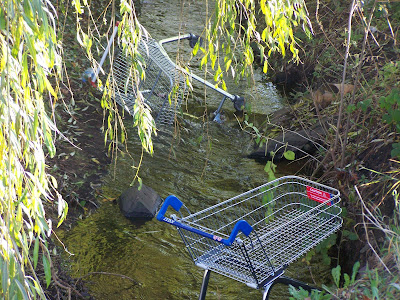 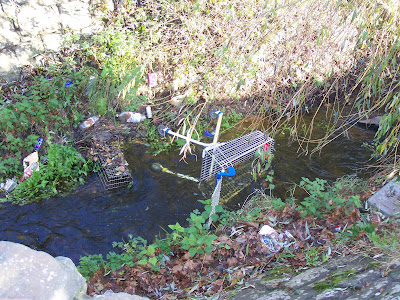 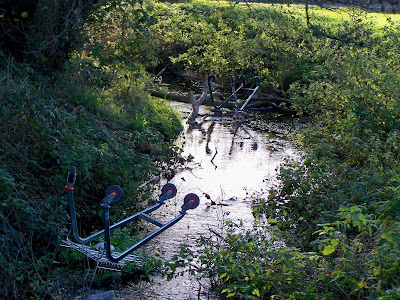 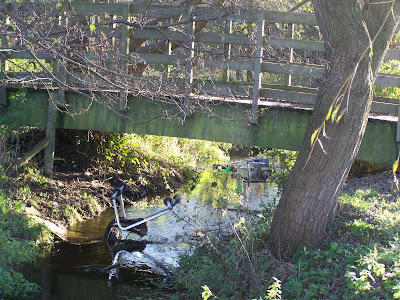 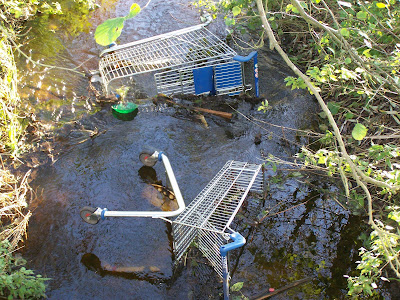 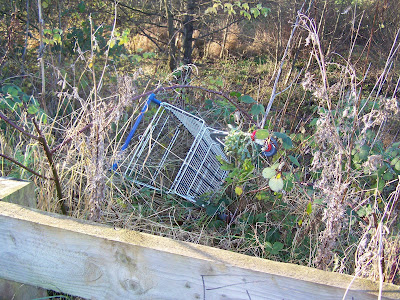 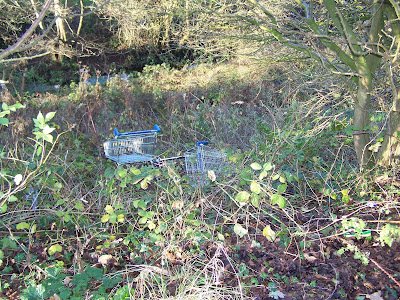 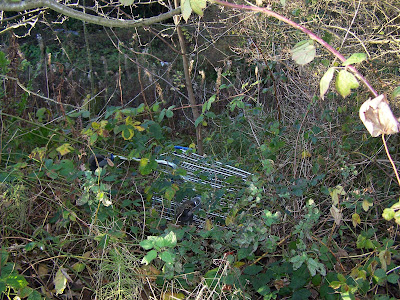 Took all these today and forwarded them to the Environment Agency. The top three trolleys are in the brook at White Lion Meadow, while the other nine are in the short stretch at the back of Waylands Road, which is also an established site for water voles (I took photos of voles and field signs there at the start of this year; you can see them on this blog). As far as I can tell, every single one of these trolleys is Tesco's - this despite there being four other supermarkets in Whitchurch. The difference is, of course, that the other supermarkets use the coin-release system.

Went last week to a talk on the local meres and mosses, and it was really heartening to hear how efficiently these internationally important wetland sites are being reclaimed and managed. Some of the creatures who now live on the peat bog at Whixall are listed in Red Data Book 1 - in other words, if they were any rarer, they'd be extinct.
.
I was able to pass on my summer water vole records to Dr Joan Daniels, who oversees the work there, and this morning she emailed with the news that one of her assistants has found what may be more field signs, so I'll go out and take a look.
.
What struck me more than anything about the talk was how lay-naturalists like me tend to assume that trees have to be preserved at all costs, but actually there are times they need taking out to preserve specific habitat, eg wetland and heathland.
Posted by Kate at 04:29 1 comment:

It's a quiet time of year for vole-watchers, but there's still the odd bit of news to catch up on.
.
Only just got any kind of real response from SWT re the mink raft prints I reported on Oct 22nd, and then it's to say they don't know what the prints are and can we carry on watching. So that's what we'll do.
.
The trolley at White Lion Meadow has finally been removed after spending almost four weeks in the water, and I notice that Whitchurch Tesco has installed some of those expensive new trolleys with wheels that lock at a certain point, meaning they can't be taken off the car park. They can still be pushed down the bank, though! So someone's spent an awful lot of money to no effect, because if the situation continues then the store is still open to prosecution. Remember my analogy about an engineer asked to build a dam but instead putting up a summer house and insisting it would do the same job? Well this time they've effectively added a weathervane on top and net curtains.
.
What beats me is that if they had the money to spend on a re-fit, then why not go for the relatively cheap and effective option of coin-release trolleys? It makes no sense at all.
Posted by Kate at 09:49 4 comments: 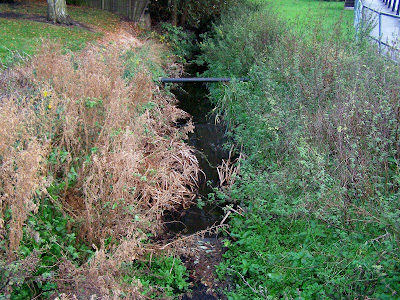 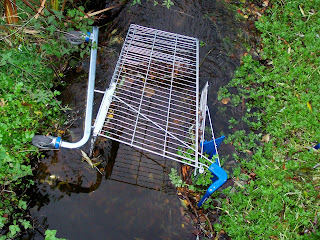 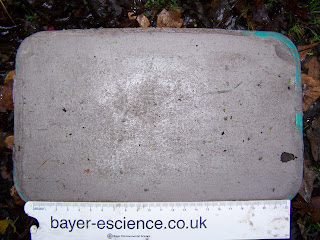 Nothing discernible on the upper raft this time except mouse prints, and I was speaking to a friend from the Wild About Britain forums last week who said he thought the previous larger ones might have been weasel. If that's the case, it's fantastic news.
.
The trolley, on the other hand, remains - it's pretty clear what message is being sent to the EA!
.
I include a picture of the current state of the brook: at this time of year the vegetation's starting to die off and everything starts to look a little sad. I don't expect to see any voles now till February/March time. But I'll look out for prints in the mud because there were a lot last year throughout the winter.
Posted by Kate at 08:20 No comments:

Went to do a litter-pick this afternoon - the trolley's STILL there. It doesn't look to me as though Tesco have any intention of removing it. Disgusting.
Posted by Kate at 06:44 No comments: 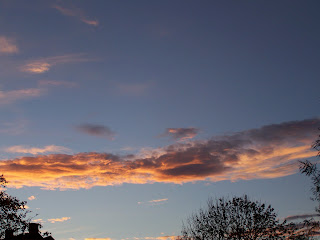 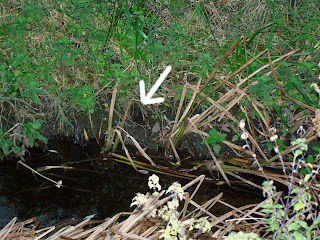 Sighting this evening, at about 4.45pm. There are burrows and trackways all along the bank; it's lovely to see.
.
The trolley isn't, though.
Posted by Kate at 13:36 No comments:

It was fabulous to see our water voles and the brook near Tesco featured on national prime-time tv! (Click to see the short film)

I can remember so clearly, at the first volunteer training day in April 2006, saying I was sure there were voles there, and a lot of people shaking their heads. Yet it's now recognized as the one public space round here where you can almost be guaranteed a sighting, as long as you go at the right time of day and year. So power to the voles, and to community volunteers here and across the country. It's wonderful seeing all those people working together to make a difference.

http://www.bbc.co.uk/earth/nature/uk/records/search/?val_1=cheshire&attrib_1=SearchText&oper_1=eq&config=ft&Template=generic_search.tmpl&page=1&pagesize=6&x=5&y=10
.
And please, Mr Supermarket, can we sort these trolleys out?
Posted by Kate at 03:34 4 comments: