Another Contender for Wildlife Photographer of the Year 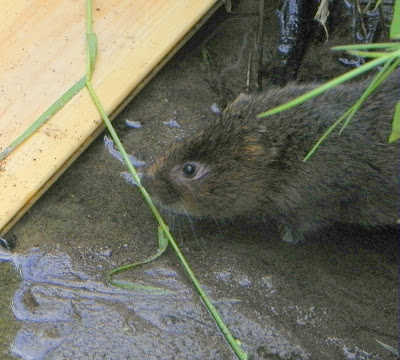 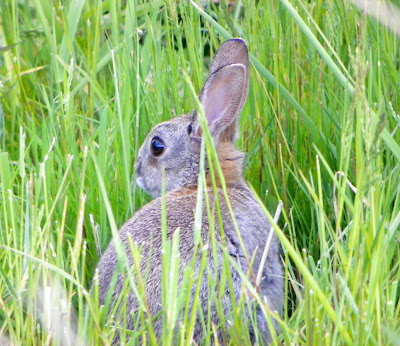 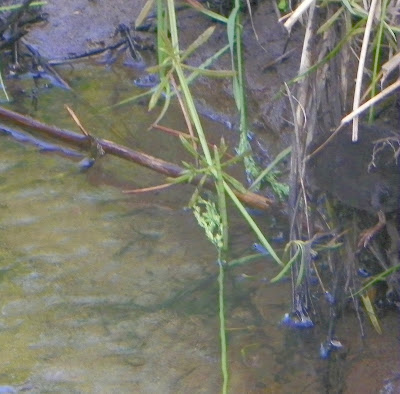 If you look very carefully at the picture above, extreme right hand edge, you can just make out a water shrew's foot. To be honest it's amazing I caught it at all as they move like lightning. I see this shrew (or one like it) almost every time I go down the field now.
.
The voles love my plank now and are using it as a latrine.
Posted by Kate at 11:37 No comments: 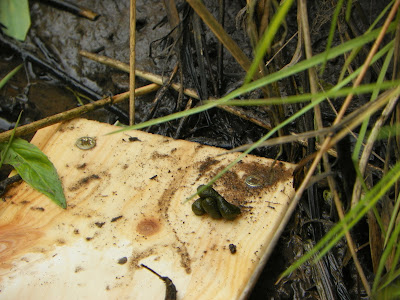 I placed my little 'platform' yesterday evening, and by this morning a female water vole had marked it with a modest latrine. I would have got a nice still shot of a vole reaching for an apple, but it turned out I had my camera set to video so instead I got a one-second movie clip. Sometimes I think I'm too stupid to be in charge of a camera.
Posted by Kate at 05:42 No comments:

Wildlife Photographer of the Year (not) 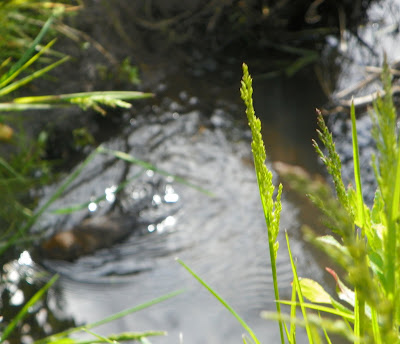 Baby water vole - you can tell it's not a swimming field vole because it's so much darker
Seeing plenty of voles - two adults and a baby this afternoon - but not getting many shots so far. This is because the profile of the bank's changed, and where there used to be a handy shelf for the voles to rest and pose, there's now sheer bank so they just swim on by. I've dozens of shots of rippling water where one's just swum past and my camera hasn't caught it in time. I'll either have to improvise with a bit of wood, or find a new stretch of brook to watch.
Posted by Kate at 08:17 2 comments: 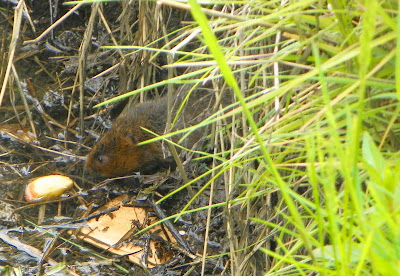 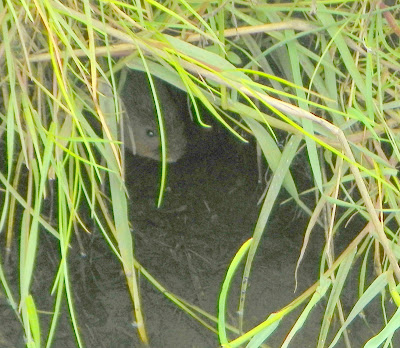 When I went down to the field this afternoon, a buzzard launched itself from the fence by the stream. Water voles are predated from the air by birds of prey, by herons and sometimes by corvids (which take baby voles). This is why w-vs usually swim keeping close to the banks, and if they do move out into open water they're always ready to dive down. The photos above are of two separate voles, but I saw two others who were too quick to photograph.
.
A check round the Staggs Brook by Black Park Road shows masses of feeding, much more than in previous years. I'd love to know how far up the brook the water voles extend. Do they go all the way to Blakemere, for instance?
Posted by Kate at 12:36 No comments: 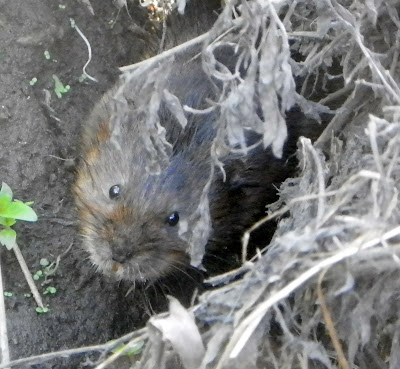 Someone told me there was a field vole peak this year, and I'm certainly seeing more than usual. While I was waiting for tonight's water vole, I saw three -fv-s, one of which swam the brook in front of me. No confusing them with baby w-vs, though, as they're smaller, their fur's a great deal lighter and they move much much faster.
.
Pleased to report several good big feeding stations up at the far end of Edward German Drive now. This is good because I think this colony had a bit of a hammering from cats last year and I didn't know how well numbers would recover.
Posted by Kate at 12:35 2 comments: 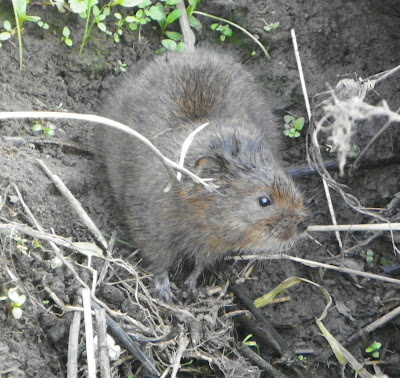 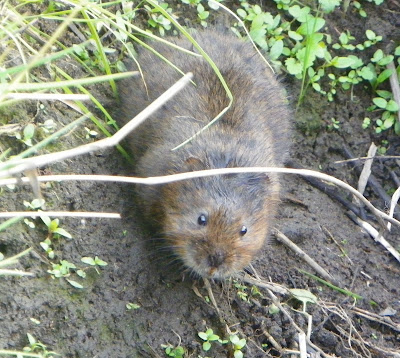 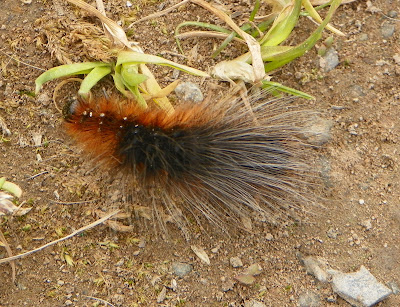 My friends at WAB reckon this caterpillar is a Garden Tiger Moth.
Posted by Kate at 02:46 1 comment: 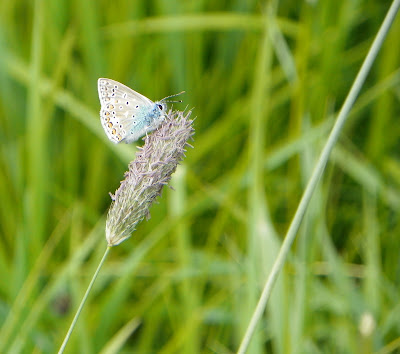 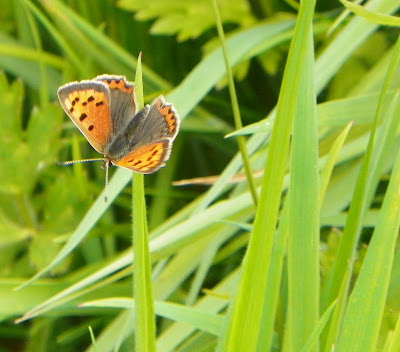 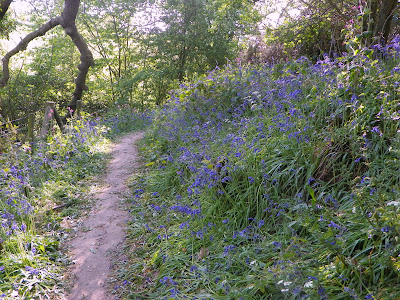 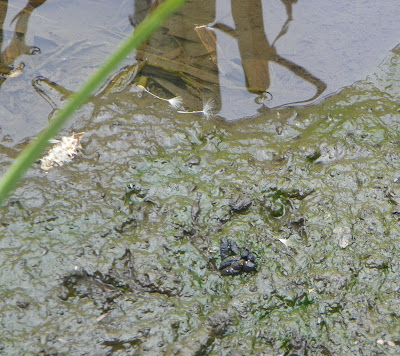 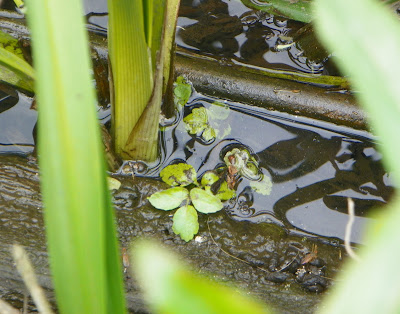 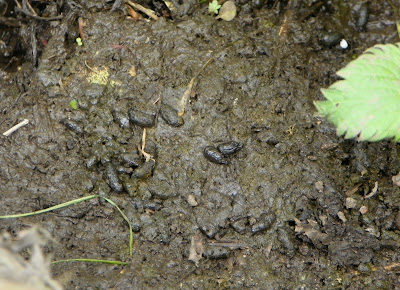 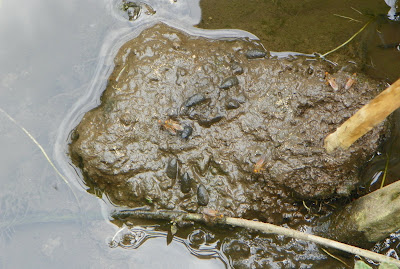 Met up with some people from Countryfile today to talk about the Dexter cattle grazing Greenfields Nature Reserve/Whitchurch Country Park. While I was there, I took the opportunity to have a quick hunt for water vole signs, and soon found these latrines and a good big feeding station. One latrine was actually inside the reserve rather than on the bend just outside it, so that's great news in view of the mink trouble last year.
Posted by Kate at 10:31 1 comment: 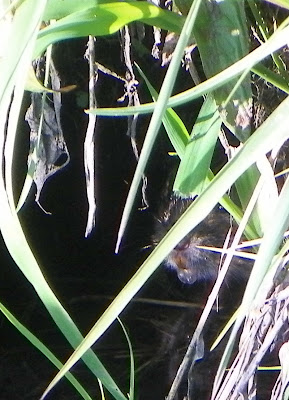 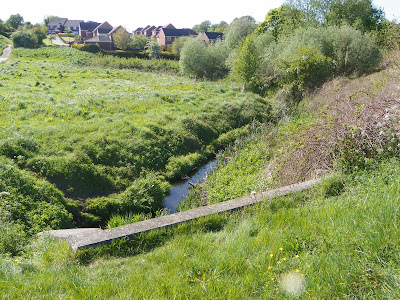 The bridge over Greenfields Rise, just outside Whitchurch Country Park, and another water vole latrine I spotted on the bank below. Great news as the mink last year cleared this stretch. 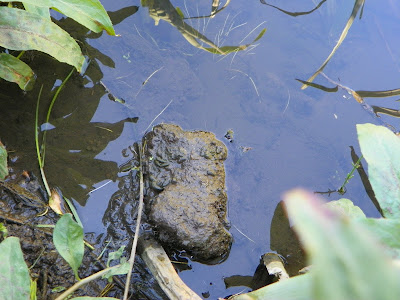 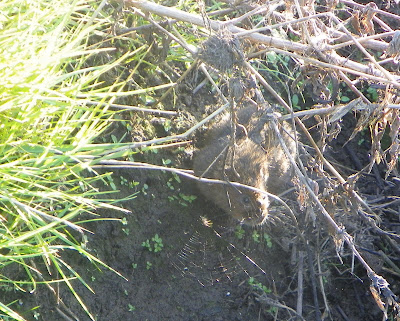 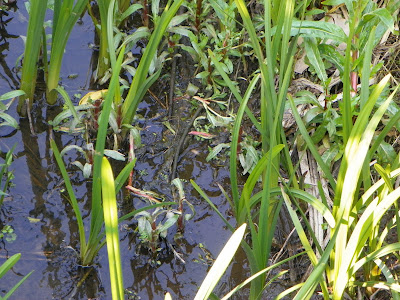 Feeding at the bridge by Homebase. 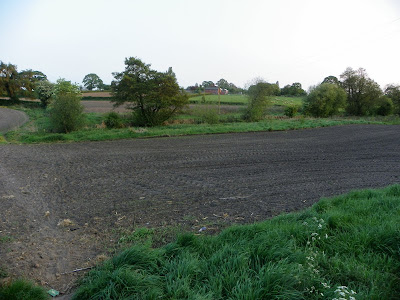 Field at the back of Queensway/Saddlers Walk, and below, feeding stations in the ditch there. 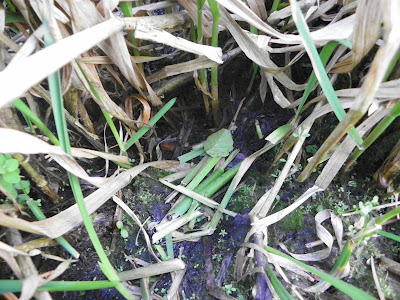 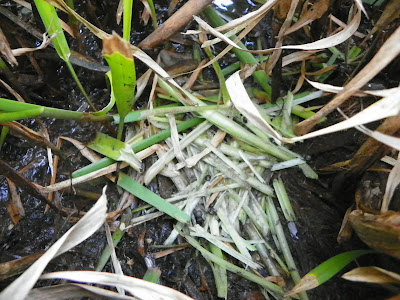 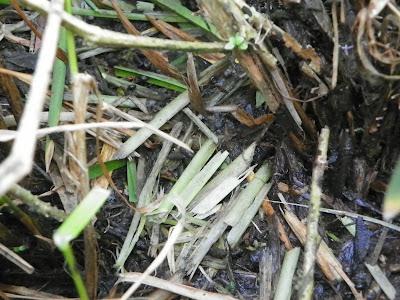 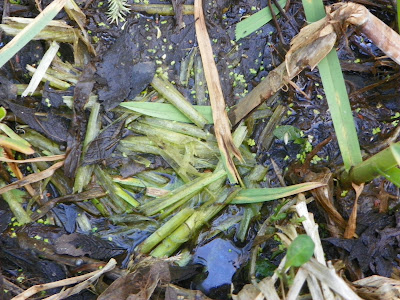 Took a stroll down the back of Queensway/Saddler's Walk and as usual the tiny ditch is full of water vole feeding stations. I wish there was some ratio of working out feeding to colony numbers as there's supposed to be with latrines, but however you slice it, it looks like a lot of voles.

Getting regular sightings near Homebase now - these will peter out as the reeds quickly grow impenetrable - and in the field off Edgeley Road. If you take a walk along that brook early morning or evening, you hear one water vole after another plopping into the stream, and the banks are now full of latrines as the females set out their territories.
Posted by Kate at 10:54 No comments: