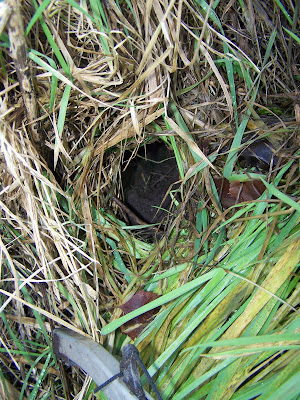 A burrow at White Lion Meadow 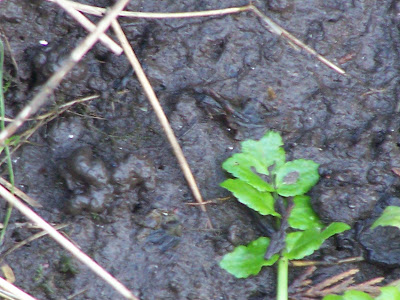 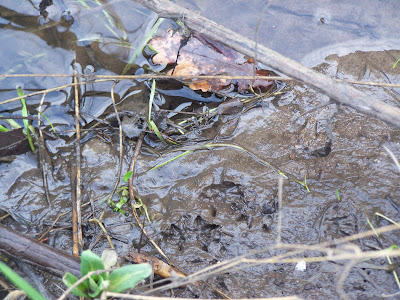 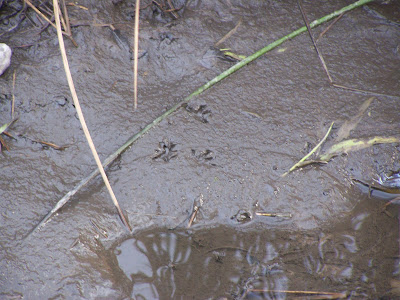 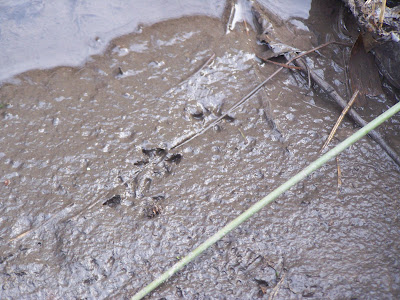 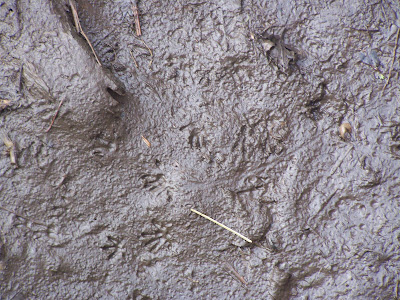 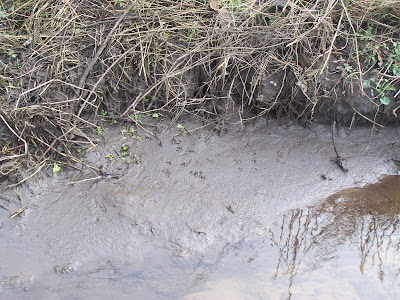 Prints all along the ditch near Grocontinental 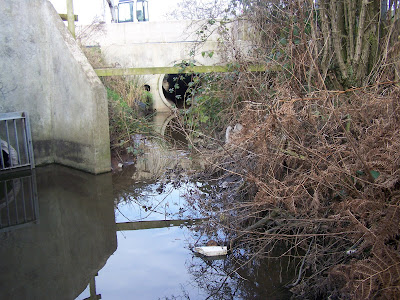 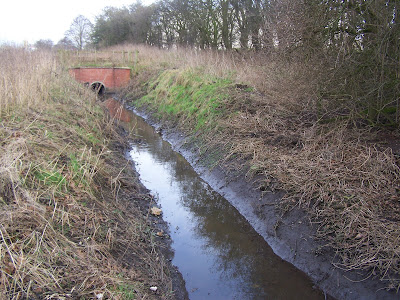 Laid a raft at Steel Heath this morning to monitor the colony there, and this afternoon went for a poke around the ditches near my house to see if there was any activity. I hadn't been there two minutes before I saw another kingfisher - amazing, given how bleak the banks look just now. I would never have guessed they'd live so close to the industrial estate.
.
There were lots and lots of prints in the mud, but are they water vole or rat? It's not a good time of year to look for droppings, and recent strimming made searching for feeding pretty much impossible as there were pieces of cut reed everywhere.
.
After that I popped down to White Lion Meadow and saw more confusing prints, plus what might be water vole droppings, though again it's not clear. There was a burrow just above the pipe, too.
.
Finally I had a walk up to Edward German Drive and spotted yet more prints, plus some feeding on buttercups.
Posted by Kate at 06:53 2 comments: 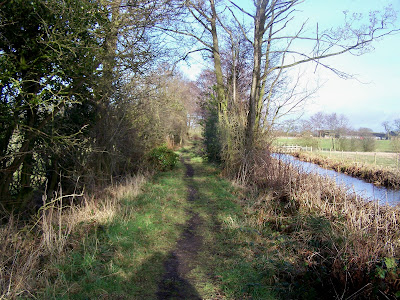 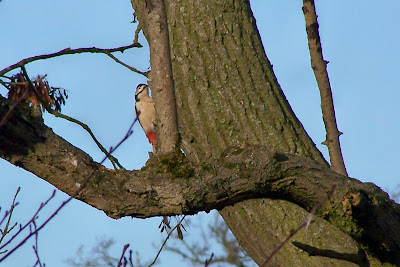 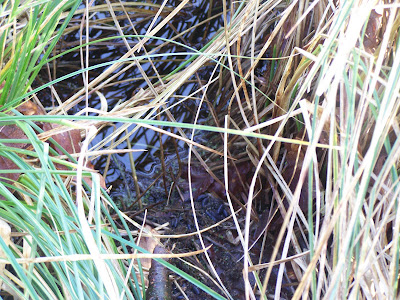 .
.
.
.
.
.
.
.
.
.
.
.
.
.
Took a walk down the Prees Branch canal to collect the clay inserts from the rafts so I can re-set them for the Spring.
.
Had a lovely long glimpse of a kingfisher flashing orange/blue for several hundred yards along the bank, and then further down watched a pair of greater spotted woodpeckers for about quarter of an hour.
.
Vole-wise, there was some feeding by the marina raft (watercress and a nibbled-open ramshorn snail shell), and a latrine at what I like to call 'vole island' which is a hundred yards or so down from the Waterloo end of the canal. Good to see these signs when usually ther's so little evidence at this time of year.
Posted by Kate at 07:17 7 comments: 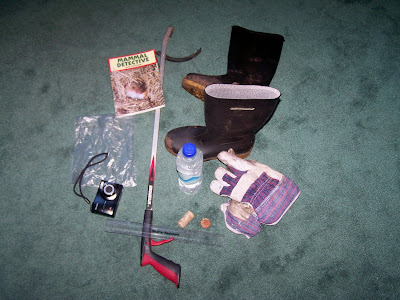 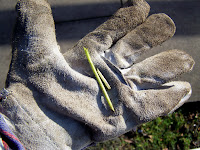 I thought I'd put together a list of kit I've found useful over the last three years for doing surveying work and checking mink rafts. Apologies if some of these seem self-evident, but there didn't seem any point in making an equipment list unless it was fairly comprehensive. So here are some of the items I take with me when I go voling:
* wellies/waders
* camera
* gloves to protect from scratches and germs (can be latex gloves if gardening ones make you too clumsy)
* gadget for scale - coin attached to a length of fishing twine wound round a cork
* pole/stick/grabber - useful for helping you balance as you scramble up and down banks, or test the depth of mud before you step into water
* little bag or pot for putting interesting samples in, eg pieces of feeding
* bottle of clean water for smoothing out the clay tracking compartment on the mink raft
* ruler for smoothing out clay, plus to help with scale in photographs
* ID book to help with tracks and scat etc - my favourite's Rob Strachan's Mammal Detective
You might also take along a phone, spare camera battery, sterile hand wipes or alcohol-based hand cleanser, binoculars/scope (though the zoom on a camera works quite well for this purpose), handheld GPS tracker for grid references, a sketch map and pencil on a clipboard (essential for proper survey recording).
If anyone has any other suggestions, do add them.
I include a recent photo from White Lion Meadow of feeding. I've spotted a suspicious-looking hole with spoil outside it; water voles dig inwards and don't leave spoil heaps outside their burrows, so I'm concerned this may be a rat.
Posted by Kate at 05:48 2 comments:

Some clever people on the Isle of Wight have come up with a tracking method called a vole spoon, which I thought was incredibly neat. They recycle old plywood blades off wind turbines, smear them with a layer of mud and push the pointed end into the wet river bank at water level. The 'spoons' are baited with a bit of apple and left overnight, and if water voles are about, they should leave tracks. The whole thing's a lot more portable and discreet than a mink raft, it has to be said.

More information in the Island Trust's newsletter: http://www.island2000.org.uk/newsletters/2008mar.pdf
and here's a spoon in situ: http://www.flickr.com/photos/island2000conservation/2386392369/

A similar size and thickness of palette could be fashioned without too much difficulty, if you don't have any spare turbine blades knocking about!

Update: I've been talking about the vole spoon on the excellent Wild About Britain forum, and several points came out of the discussion that I'd like to use to clarify the information here.
.
Firstly, it would be crucial to site the spoon somewhere it wasn't exposed, because obviously the last thing you want is to encourage predators to pick off your water voles as they feed. Nestled down among tall reeds, for instance, might be a good spot.
.
Secondly, the spoon, as I understand it, is meant to be used infrequently - at most, once a season per stretch? - and for a day/night only. If you left it in place permanently, it might again encourage predators to pick off your voles.
.
Lastly, it's not meant to be a replacement for survey work. Surveys which count and record field signs like latrines and burrows and feeding stations are crucial in monitoring water vole populations, and in getting to know particular areas and habitats. However, there may be occasions when you need proof of water vole presence quickly - for a building developer or a council, say, or after a bad flood - or when you can't examine the full length of a bank because it's mostly inaccessible.
Posted by Kate at 10:52 8 comments: 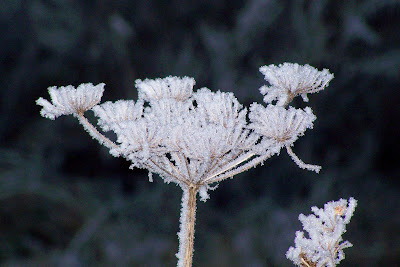 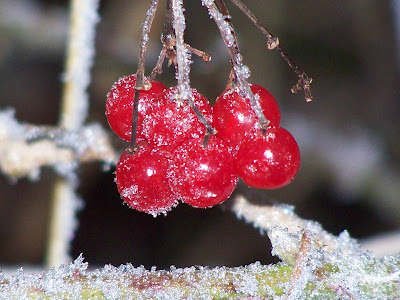 Here's the excellent Urban Extension blog reminding us of a really important resolution we can make for 2009:
http://urbanextension.wordpress.com/2008/12/23/do-one-thing-for-wildlife-this-christmas/
.
Roll on the Springtime!
Posted by Kate at 10:23 5 comments: