Took a walk round town following the brook as it travels from the south west of Whitchurch - the Country Park behind Greenfields Rise - to the north east and Yockings Gate. It was interesting to note where water voles appeared to be active, and where they seemed absent.

There were stacks of prints in the Country Park, plus these droppings just by the bridge where you turn into Greenfields Rise. Unfortunately there are also a great many cats in this area, so although it's ideal habitat and a protected nature reserve, it's not good as regards levels of predation. If you own a cat, please fit a bell on its collar, and consider keeping it in at night as both strategies have been proven to lessen the impact on wildlife. 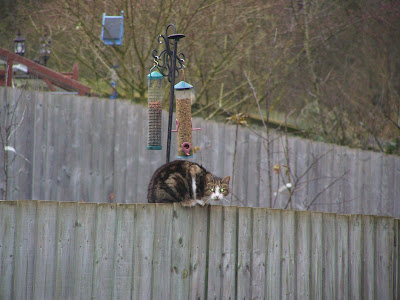 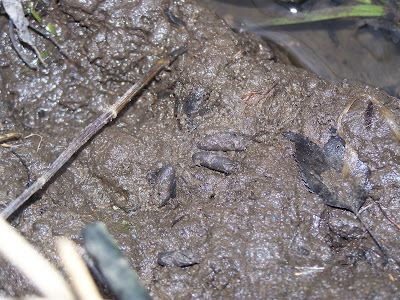 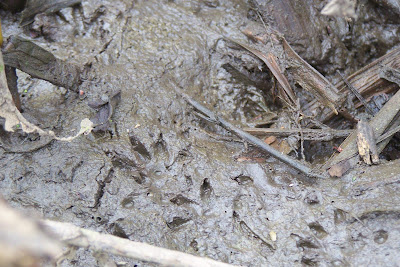 I then travelled to the south east side of Whitchurch and checked out the railway bridge by Homebase. There were prints round the brook on both sides of Station Road, and down behind Waylands Road, too. 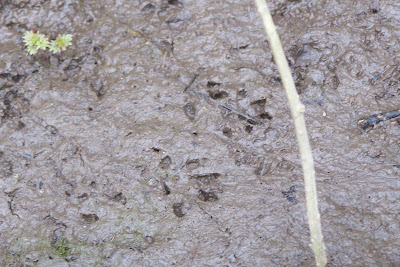 Next I visited Black Park Road and found very little except the water course pretty much choked up (below). Earlier last year I recorded a lot of feeding here and a latrine, but there didn't seem to be anything much going on. I don't know how much free-flowing water the voles require. Could they live somewhere like this? I suppose we'll see as the season progresses. It's still early yet. 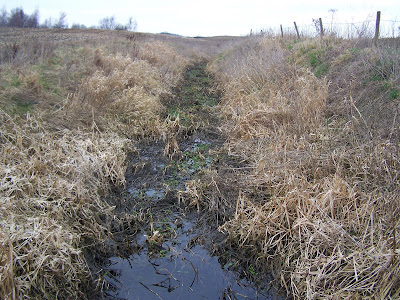 Finally I dropped in on Yockings Gate, to find it had been dramatically cleared and the tops of the banks covered with heaps of pulled-up reeds. This will be a good thing long-term, but I can't help worrying that voles may have been harmed in the process. I thought the law said you were only allowed to work on one bank at a time, to give the voles somewhere to escape to, but I don't know who's done this work. Let's hope the voles took themselves up- or down-stream, and will come back when the cover's re-grown. It's what they did at White Lion Meadow when those banks were scarrified. 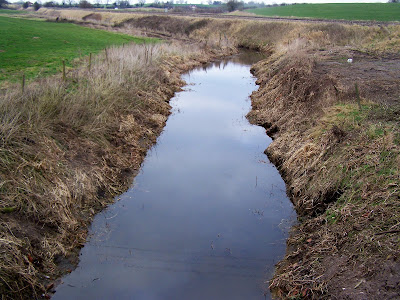 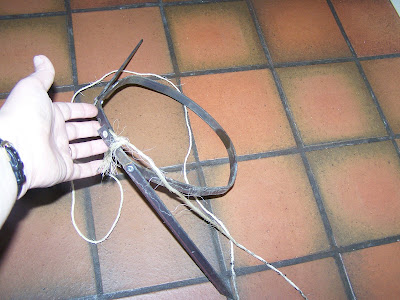 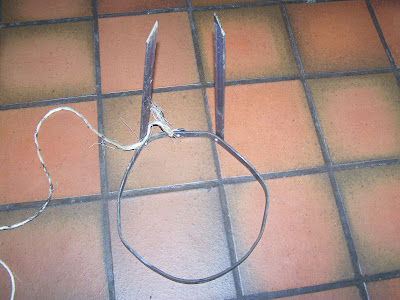 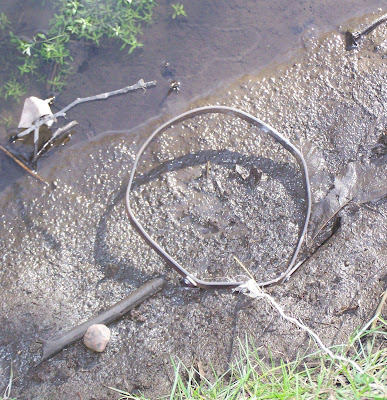 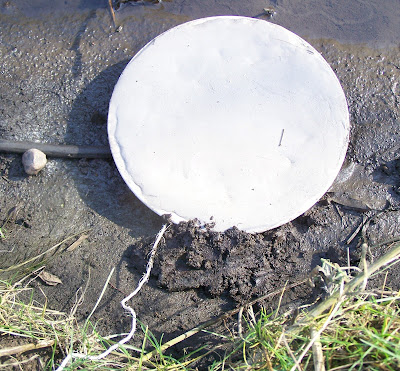 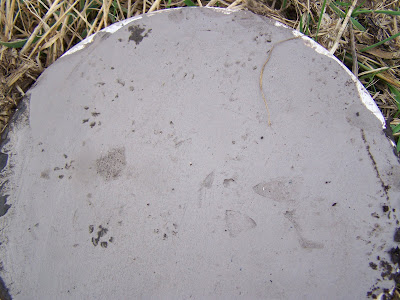 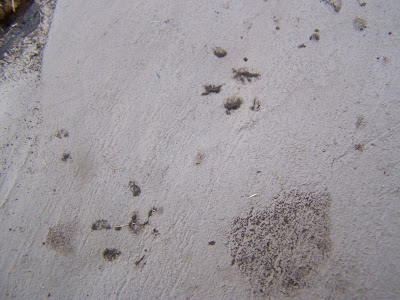 Using the Isle of Wight 'vole spoon' as an inspiration (http://staggsbrook.blogspot.com/2009/01/vole-spoons.html ) Lorcan from the Whitchurch Water Vole group's come up with the Whitchurch Plate, an overnight tracking device designed to gather evidence of water vole presence quickly. He's used a metal collar with swivelling legs at one side that can be sunk into the bank either vertically or horizontally. The plate - an ordinary dinner plate - is spread with soft clay in the same way as a mink raft, then balanced on top of the metal frame. Then you add a few bits of chopped apple and leave for 12-24 hours (maybe 48 maximum). The whole contraption's attached to a bit of string so you can pull it out easily, doing minimum damage to the bank side.
.
To improve the model further, we need to attach the plate securely to the collar - use a plastic plate with holes drilled in the sides and fastened with wire, maybe. We also could put a thin layer of soaked oasis under the clay to keep it moist, as the mix I spread on the test plate dried out slightly and therefore we only got muddy footprints from the voles rather than indented ones.
.
Still, essentially it works, and is a LOT less cumbersome than a mink raft!
Posted by Kate at 06:39 4 comments: 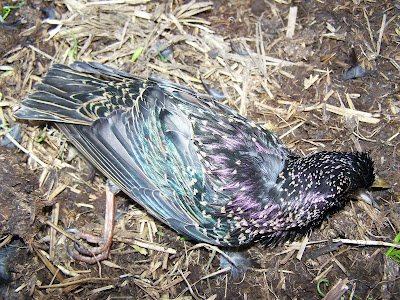 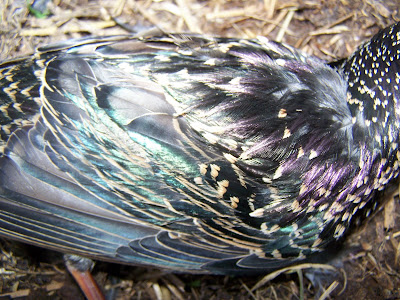 I don't know what killed this starling, but I was blown away by the beauty of its plumage, something I've never seen so close up before.
Posted by Kate at 08:54 3 comments: 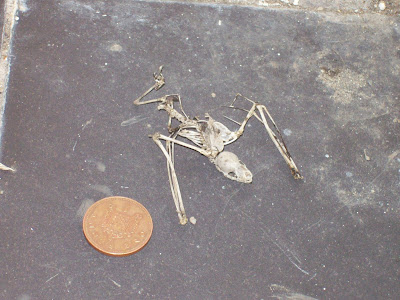 I've been in Criccieth for a few days staying with a friend, and was very interested to examine the bat skeleton her son found lying in the porch. Not only were the bones tiny, but they were literally light as feathers. I have no idea what sort of bat this is. Pipistrelle?
Posted by Kate at 11:49 No comments:

Spring signs, and an old friend 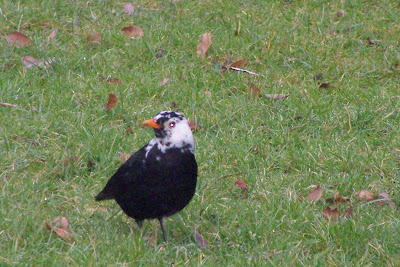 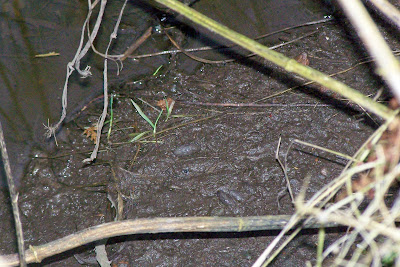 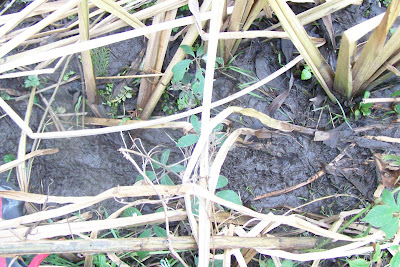 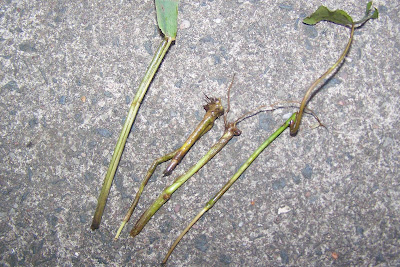 Finally we have a bit of warm weather, and there are some promising signs by White Lion Meadow car park. This feeding by the bridge, with its classic slanted ends; a lot of prints (see the trackway, third photo down); and what I'm fairly sure is a water vole latrine, though I couldn't get very near to see any detail.
.
And here's our blackbird again - this must be his fourth year, I think.
Posted by Kate at 09:04 2 comments: