Looks like it was contractors working for Tesco; the Whitchurch store replied to me and I've been assured that the firm employed will be made aware of the special circumstances next time they come back to do any landscaping. I've also emailed Tesco's central maintenance department, just to make sure the message gets passed right around. Hoping for a positive response there, too.
Posted by Kate at 06:28 No comments:

A closer look at what's been done to the banks 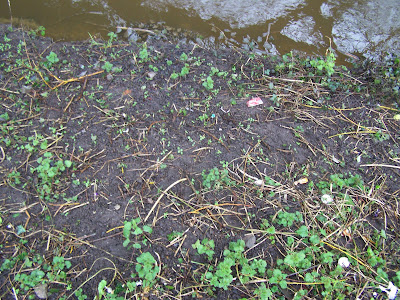 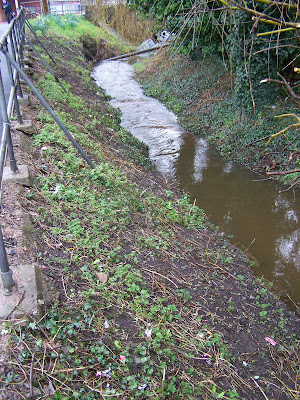 You can see here how the cover's been removed - how can this work not have disturbed the burrows we know are along this stretch? And if this were to occur during the spring, summer or autumn, it would be disastrous.
I've not had a reply from Tesco yet, but I will keep trying.
The trolleys are back again. 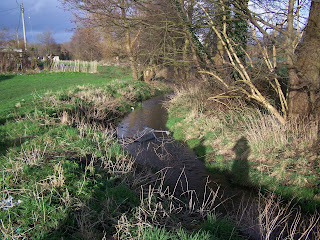 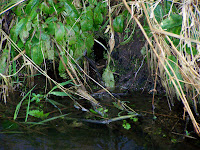 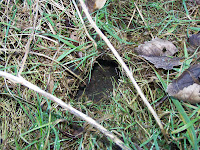 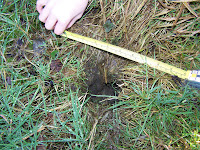 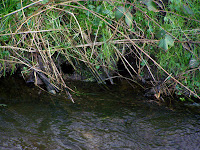 I went for a walk round the back of the estate this afternoon and looked at that stretch of the brook. In the section where I saw a vole last year there were a lot of burrows, but no other obvious signs; then again, it had been pouring down most of the day, so footprints and latrines would have been washed away.

It's a beautiful area, teeming with wildife. While I was walking I saw a charm of goldfinches, some long-tailed tits and a tree creeper. Oh, and that ubiquitous beast, a Tesco trolley.
Posted by Kate at 08:55 No comments:

The trolleys have gone, but the banks between Tesco and the bridge have been, what, raked - I don't know how else to describe it. The litter's mostly gone, but so has a fair bit of the vegetation cover. At this time of year the effect isn't dramatic, but I'd hate to think this kind of management was going to go on during the spring and summer.

Who's behind it? I don't know. I'll start by asking Tesco, and report back here.
Posted by Kate at 10:57 No comments: 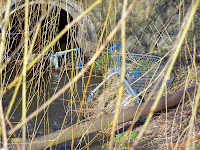 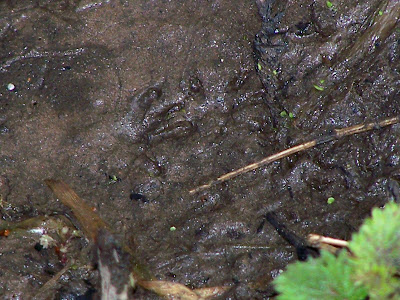 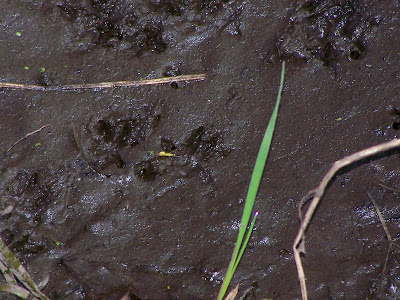 Stacks of prints on both sides of the brook, especially around the bridge.
Posted by Kate at 06:13 No comments:

The State of Play

The resurfacing work by the car park has finished and I'm pleased to report fresh prints on the bank by the pipe (see map). But the trolley is still in the water! How long has that been now?
I include this lovely feeding station I saw in Danson's Wood on Sunday, to cheer myself up. There are some mighty industrious voles round that pond.
Added later: now think this stripped reed is the work of a field vole!
Posted by Kate at 13:47 No comments:

A hopeful email from the manager of Tesco's about coin-release trolleys: I'm keeping my fingers crossed.
Posted by Kate at 11:22 No comments: 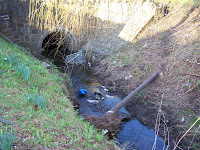 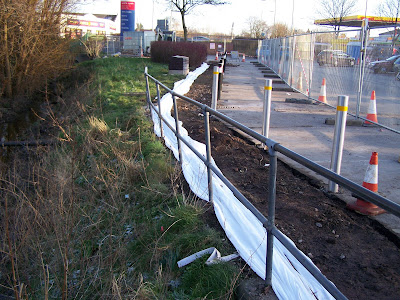 I'm reassured to know this work's been passed by the Environment Agency, but very glad it's not happening later on in the year when the voles are more active. According to the workmen, it's a matter of replacing the paving slabs on the walkway with tarmac and putting in wide-spaced bollards. But I don't see how the latter's going to help reduce the number of trolleys in the brook, as Tesco claim. Waiting to hear!
And the trolley by the culvert is still there (unless it's another one).
Posted by Kate at 09:53 No comments:

Not the brook, but some good examples of field signs 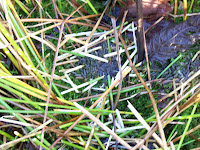 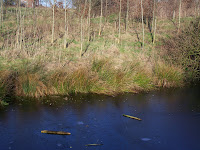 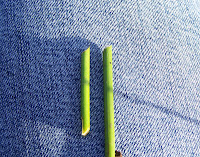 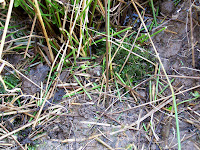 These feeding stations are all round the pond in Danson's Wood. I've taken out a couple of pieces of gnawed reed to show the characteristic 45 degree cut that water voles make. There are a few droppings, too. No signs of burrows, but there's quite a lot of sedge that the voles are probably living in. The canal is close by and last autumn I saw evidence of feeding there. A great habitat - perfect example of 'wildlife corridors' which small colonies need to increase their gene stock.
As for the Staggs Brook, the trolley's still in there...
.
Added later: now think these stripped pieces of reed are field vole, which means the latrine almost certainly is too. If I'd had my gadget for scale, I could have used it to check!
Posted by Kate at 09:32 No comments: 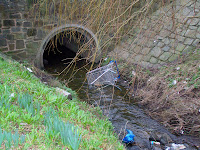 This one's at the entrance to the west culvert. Doubtless it'll be removed, but how much damage will it do to the banks on the way out? There are, I think, burrows here.

It would do Tesco's so much good if they were seen to respond to this local environmental issue.
While I'm on, here's a link to the Wood Lane Nature Reserve for February, where I'm interviewed about the brook, the blog and the Whitchurch voles. (With thanks to John Harding and Jo Darlington.)
http://www.woodlanereserve.co.uk/podcasts.htm
Posted by Kate at 01:42 No comments: