Here's one I made earlier 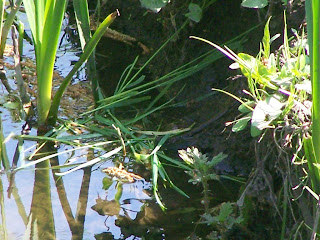 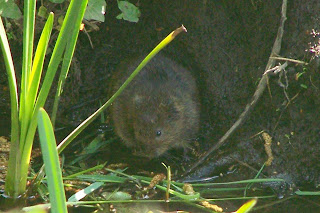 And a picture of the feeding station afterwards. I'll be honest; I don't know why they do this, go to all the trouble of making piles of chopped grass. It's not as though grass is in short supply! Afterwards the vole just swam away.
Posted by Kate at 09:17 No comments: 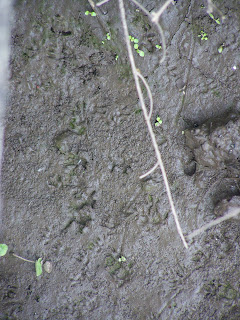 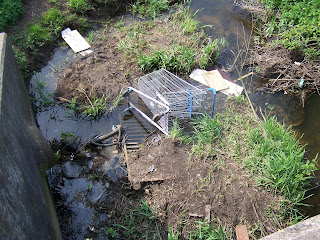 Took a walk down the Country Park this afternoon. Unsurprised to find a Tesco trolley there, but I was pleased to note water vole prints all the way along the banks. Lots of green dock leaf beetles, too; not rare or anything, but very pretty.
Posted by Kate at 07:41 2 comments: 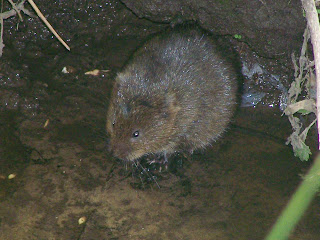 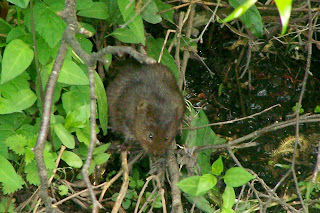 I once kidded a friend that I'd been taught to recognise each vole individually, but actually I bet I could recognise this one again, with the dark patch on its (his?) head.
.
They're feeding a great deal on the willow catkins, which I suppose are full of protein in the form of pollen. They also seem quite troubled by mites!
Posted by Kate at 09:17 No comments:

Where are the females? 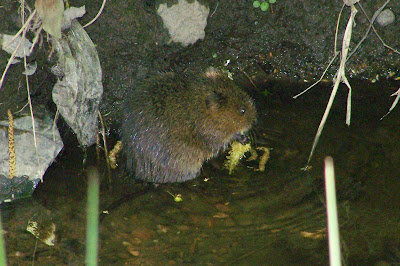 Underground looking after the babies, I suspect. 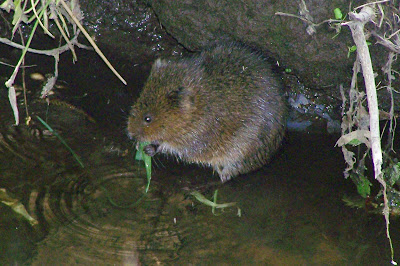 These videos can take as much as 2 minutes to crank up, by the way. (Edited in the light of Dave's comment below!) If you have speakers on your PC, turn them up to hear the birdsong.
Posted by Kate at 12:48 7 comments: 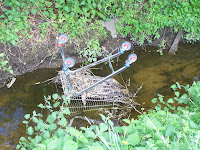 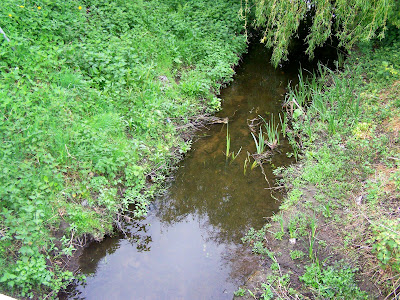 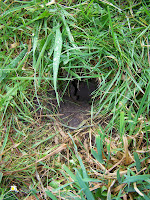 ...you stand for half an hour and see nothing, as I did this morning. That's the way of wildlife watching. But there were fresh footprints, and the banks are greening up nicely which will provide protection for the babies when they venture out.
.
This burrow is on the top surface of the bank; water voles like to have entrances on several levels for maximum escape opportunities, which is why some openings are under water. The one here is there in case of massive flooding, so the vole can get right away if necessary.
.
I'm pleased to say the trolleys pictured below are now finally gone, and encouragingly I've had a letter from the new manager at Whitchurch Tesco inviting me in to talk to him about the situation. I'll report back on this when I know more.
.
Post script: In retrospect, I think this burrow belongs to a rat as it has a spoil heap at its entrance. Water voles' burrows are tidier than that! They're also more likely to be near the water's edge - though what I said above about voles having entrances on several levels is true as well. Not easy telling the two sorts of burrow apart.
Posted by Kate at 02:27 2 comments: 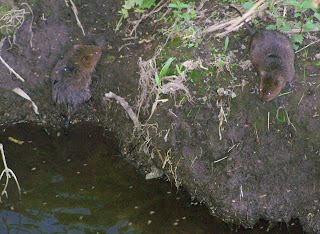 Apparently the professional way to sex voles is to pop them in a Pringles tube and have a good look. Otherwise, it's down to whether there seems to be a bit of a ruff round the neck; if there is, it's a male. It's a subtle distinction, though, so unless a male and female of approximately the same size are standing helpfully together, it quite hard to tell, especially this time of year when some of last year's adults are looking pretty moth-eaten.
.
That said, I got a good look at the vole on the right and I reckon it's a male. The other one chased it away and it swam along and under the bridge all the way to the Tesco end culvert, where it had to negotiate another (new) discarded trolley. It ate some willow catkins, and it was while it was sitting hunched up that I spotted the ruff.
.
After that it swam back upstream against the current, and had a struggle, even though the water's low and slow just now. Water voles don't have webbed feet, and are easily swept off course. Several times it hopped up onto the bank and ran along the soil as the easier option.
.
I'd love to know how many breeding pairs there are along this stretch. You're supposed to be able to estimate by counting latrines, but that's if you can spot them!
Posted by Kate at 12:29 1 comment: 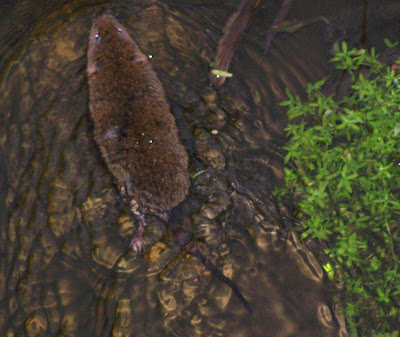 I love the shape they make when they swim. As far as I'm concerned, there's no finer sight in English/Welsh/Scottish* nature than a water vole cruising up a river in the evening light to the sound of birdsong.
(*There are no water voles in Ireland.)
Posted by Kate at 12:12 No comments: 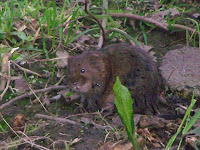 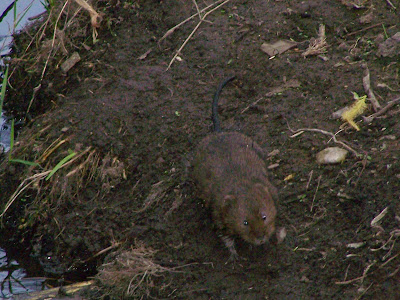 Two voles this evening. I never realised they had such anxious faces.
Posted by Kate at 11:16 2 comments:

Click to Play
Posted by Kate at 12:44 No comments:

Look at the trouble she's having balancing. 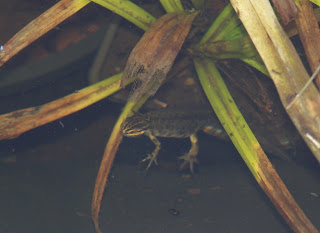 So I'm hanging out the washing and I look down into the pond...
Posted by Kate at 11:20 No comments: 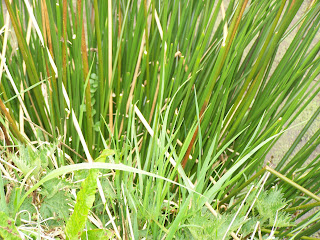 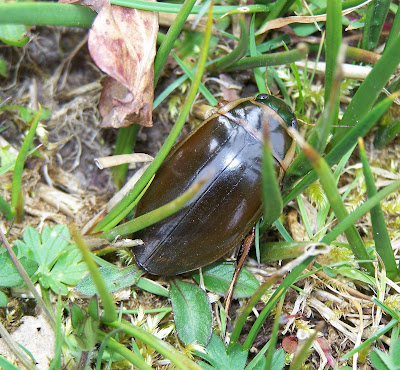 Took the boys for a walk in the fields round Ash this afternoon, and found this chap slap bang in the middle of a field. In my ignorance, I didn't know great diving beetles could fly. I gather they're fearsome creatures, if you're tadpole-sized.
.
Round a pond further on I saw this nibbled grass; looks like water vole activity to me. Click on the picture to enlarge and see in detail the classic 45% cut at the ends of the stalks.
Posted by Kate at 09:01 No comments: 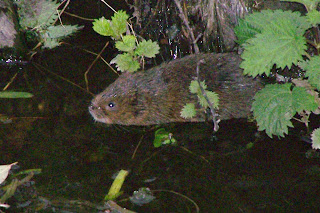 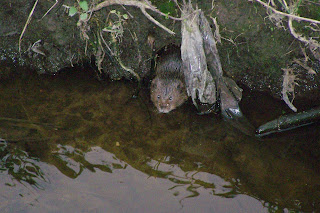 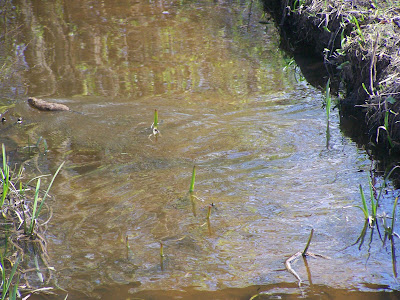 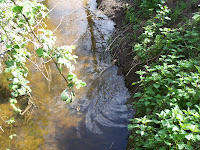 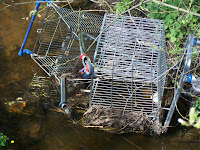 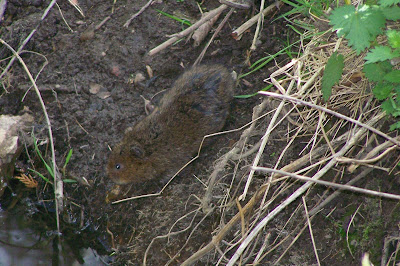 summarised here. I've been away for a week, and I gather in my absence a bike was dumped in the ditch, then removed. We still have the trolleys, now an absolute mound of rotting debris. Lovely.

But I'm being overly negative. It was great to watch a vole today just under the bridge, so close I could almost have touched it, and to chat to interested passers-by about the colony.
Posted by Kate at 11:33 No comments:

I saw three voles this evening, two by the bridge, and one slaloming its way from the east culvert end through the shopping trolleys which have been there for, what, a month, six weeks? The litter's insane, which is depressing as I totally cleared the banks last week. Now an odd tin or bottle isn't going to bother the water voles, but scraps of food being dropped in on wrappers will encourage rats, and rats can drive out voles, as this email from Derek Gow says:
.

There is little doubt that Brown rats can be major predators of juvenile water voles. Adult voles are probably safer through they will apparently avoid rat foraging areas if they can. Brown rats typically exist at low densities along water courses unless there is a food source abundantly available which allows then the option to exist in larger numbers. Quite typically this could be a farm or waste food disposal opportunity.
.

So maybe if we all kept an eye out for litter being dropped, we might make some positive impact on the problem. The fact a lot of it's caught up in the trolleys doesn't help...