Never Pick Up a Wood Mouse by its Tail 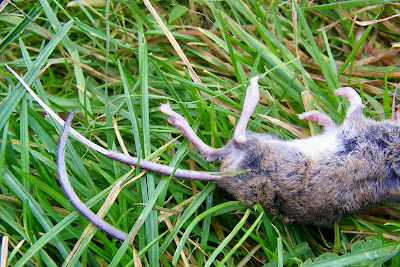 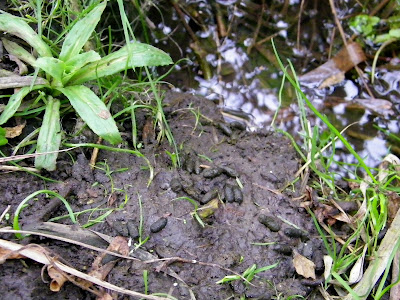 Someone on the Wild About Britain forums told me this: that if you grab a wood mouse's tail, the skin sloughs off painfully, and then that portion of the tail dies and falls away. I found this dead wood mouse in a field and tried to move it so I could take a picture, and sure enough, away came the tail skin. It's a survival strategy, but a costly one. The correct way to hold a wood mouse is by its scruff, like the yellow-necked mouse and bank vole here: http://urbanextension.wordpress.com/2008/10/11/a-morning-with-mice-voles-shrews-moths-at-corfe-mullen-meadow-reserve/
.
Short walk this afternoon down Edgeley Road revealed this water vole latrine. It seems very late in the year to be seeing latrines. Does that mean late-breeding females?
Posted by Kate at 08:54 10 comments: 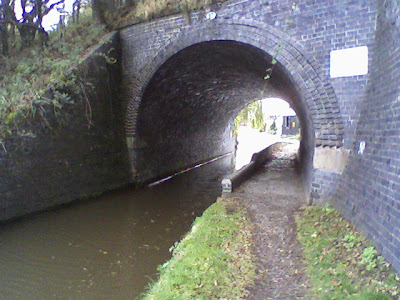 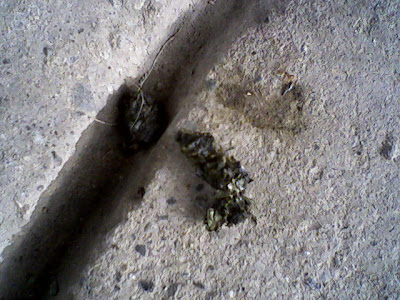 It's always worth checking under a bridge! The fairly busy canal area at Grindley Brook is obviously home to at least one otter. I found two spraints under two different bridges this lunchtime.
Posted by Kate at 06:42 No comments: 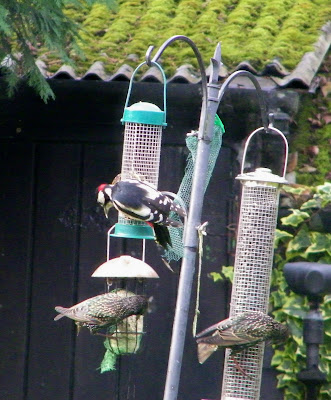 Greater spotted woodpeckers aren't by any means rare, but I've never had one in my garden before. I've been much more scrupulous this year about keeping the feeder filled, and I've started getting nuthatches, goldfinches, greenfinches and siskins which are also out of the ordinary for me. The woodmouse in the shed appreciates sunflower hearts too, I've found.
Posted by Kate at 02:55 No comments:

While I was washing up 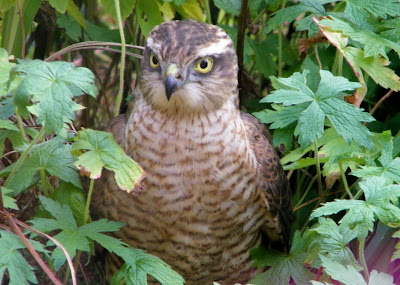 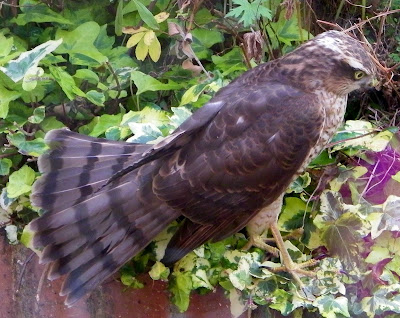 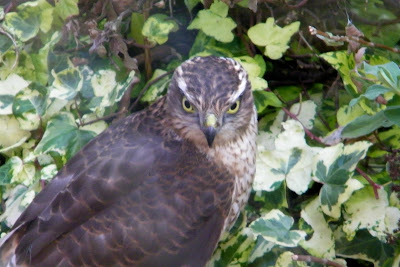 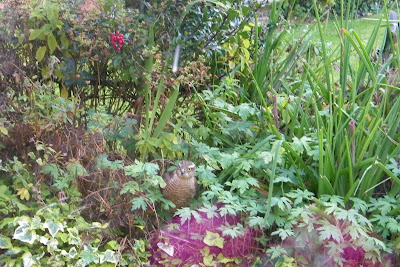 A commotion outside my kitchen window, and this creature emerges from the bushes. My son says it's a female sparrowhawk. (Photos are taken through glass, the best I could do under the circumstances!)
Posted by Kate at 09:26 4 comments: 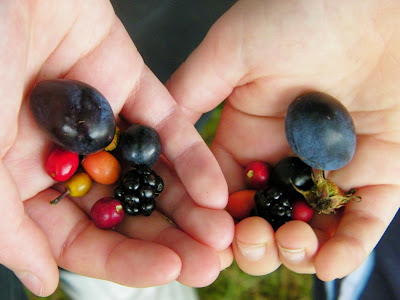 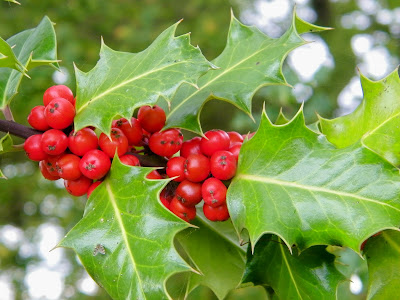 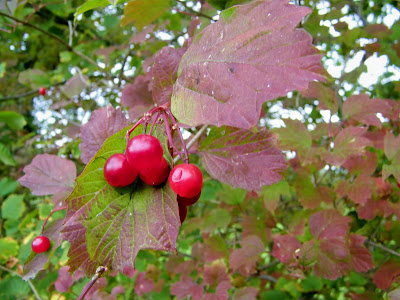 The vole-watching season's pretty much over, so this blog will be doing what the water voles do, which is to go into semi-hibernation till the spring (not true hibernation, but a kind of torpor with only occasional appearances above ground!).
.
So has it been a good year for water voles in and around Whitchurch? Well, there've been gains and losses, as some colonies began well and then seemed to fall away, and others started hesitantly and became very strong. The most active have been in the fields near me, the ditches near Grocontinental which have afforded me lots of sightings and photographs. White Lion Meadow's been quiet, but perhaps not as quiet as sightings would suggest, in that I've spent a lot less time watching there because there wasn't so much obvious activity - a vicious and unscientific circle. I'm still not sure whether the sightings across the car park at Lidl were field/bank vole.
.
Edward German Drive has been steady: no actual sightings, but a lot of clear field signs. The back of Wayland Road is hard to access, but there were certainly water voles there mid-summer.
.
Moving further up, the section by the railway bridge near Homebase suffered some kind of crash: last year there was a very strong colony there, and there were plenty of field signs in spring 2009. But when I surveyed late summer, there was nothing at all round the bridge, only at the end near the field. I have no explanation for that, but it goes to show how what looks like a completely established group can easily be wiped out. However, they do beed quickly, and colonies naturally shift and expand and contract, so as long as there are voles on reither side, that section should be repopulated again as the habitat's excellent.
.
Albert and I both found lots of vole activity at Black Park Road, but I couldn't see anything at Yockings Gate. There was some vicious dredging there, so I think it'll need anopther year before the banks are suitable again. And I haven't followed the Staggs Brook further up as it's private land. The golf course now seems to have lost all its water voles (and there were so many a few years back! I suspect mink as we've had reports from round there) but there've been vole sightings in ditches close by.
.
On the other side of town the various colonies at the Country Park have been consistent, and moving out of Whitchurch, we've continued to see field signs at Steel Heath, the Prees Branch Canal between Waterloo and Whixall Marina, and in Whixall generally. I haven't spent much time oneither Brown Moss or Whixall Moss this year, so I don't know how the voles are doing there.
.
Anyway, all we can do is hope enough make it through the winter to get cracking next year. I'll be out with my camera the first warm day in February!
Posted by Kate at 00:33 6 comments: 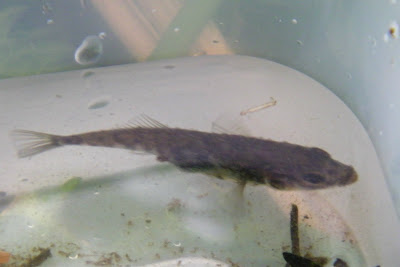 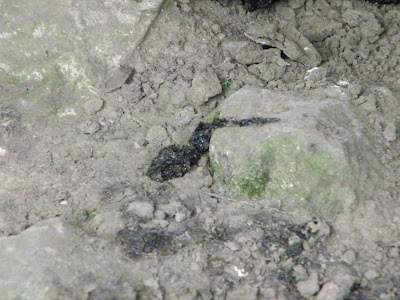 Now we're into October, water vole field signs are disappearing, but an afternoon in the Country Park turned up a couple of active-looking burrows and a bit of feeding and paw prints.
.
The otter's still about - lots and lots of fresh spraint - and my sons fished out this nine spined stickleback to study for a few minutes. The stream's also heaving with little shrimps, which seems a good sign.
Posted by Kate at 01:48 No comments: