Holing Up for the Winter 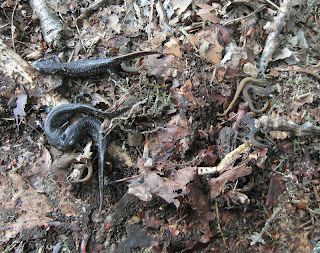 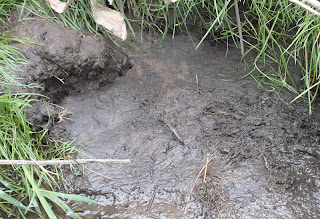 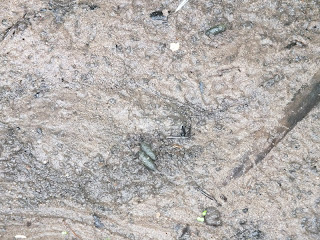 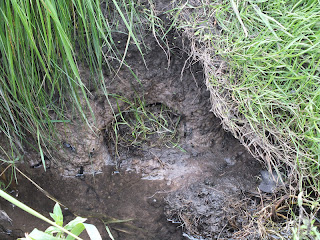 It's more or less time to say goodbye to the voles for this year - I did spot one briefly this morning, but mostly they're packing away in preparation for the winter. They'll be storing high-calorie tubers and blocking up strategic burrow entrances, as in the photo above. Very little sign of feeding, except for gnawed iris roots, but are still plenty of droppings about, so I know the voles are around.

Looking forward to speaking at Walford College's Bioblitz this afternoon with Rosie Rees and Lorcan Adrian, stressing the importance of reporting sightings and disseminating vole information between various parties - landowners, the EA, the council, water authorities, the WT etc - and also the need to protect wildlife corridors as well as individual colonies themselves.
Posted by Kate at 04:53 No comments: 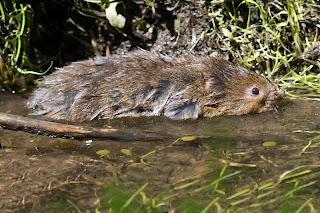 I've lately been doing some research for a magazine article, and also for a talk at Walford College's Bioblotz
http://www.bnhc.org.uk/home/bioblitz/national-bioblitz/midlands/walford-college-bioblitz-shropshire.html
and it's struck me just how many people are working hard nationwide to save the water vole.

I've lost count of the folk who track and log these animals, who lobby their council planning departments, who travel the country taking wonderful photographs to raise the species' profile. This year I've met up with Richard Steel (link to his website is on the right); with Vicky Nall and team at the Cheshire Wildlife Trust; with Gareth Parry who's studying the effect of carnivores on vole populations; and with John Harding and Rosie Rees who've been putting together a film about water vole behaviour. The Whitchurch Water Vole group led by Malcolm Monie continue to do vital habitat management and survey work, and online I've been following vole news from Views of the Ock (link right) and Jo Cartmell, amongst others. There's a substantial network of men and women doing their best to halt the decline of the species and help build up numbers again.

But three people I've come across lately deserve a special mention for the good they do. The first is Rob Strachan, who currently works for the environment agency and co-authored what I believe is the definitive guide to water vole mitigation, The Water Vole Conservation Handbook. He also gives excellent talks and is a mine of information on riparian wildlife generally.

Secondly there's Derek Gow, a man who actually farms water voles: http://www.watervoles.com/ He offers training days to help with issues like translocation when voles need saving from building developments, and he provides voles for release when conservationists are trying to re-stock sites where those animals once were. To say he loves his work would be an understatement.

And lastly, Professor Xavier Lambin of Aberdeen university, who's been in the news this week with his findings of water vole dispersal models: http://www.bbc.co.uk/news/science-environment-19503827 Once again his investigations underline the need to preserve wildlife corridors as well as individual colonies themselves, and avoid habitat fragmentation.

It's good to have so many on the case, volunteers and professionals at all levels. Given the problems water voles face at the moment, they need all the allies as they can get.
Posted by Kate at 07:16 2 comments:

Change of Behaviour with the Seasons 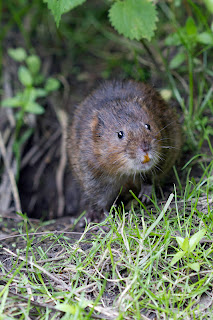 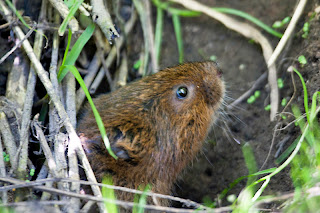 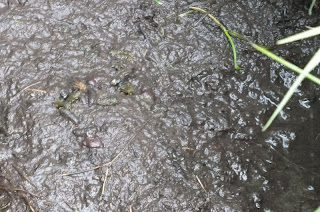 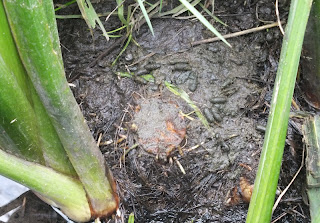 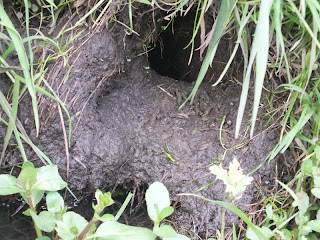 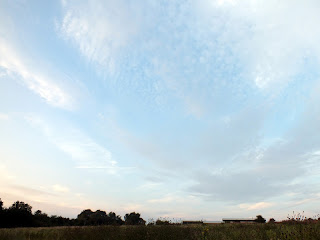 I'm already noticing a change in the way the voles are feeding, and moving about generally. Just a month ago they were happy to swim about openly in front of my camera and sit and eat just by my feet. Now they're dashing past at speed underwater, and the two I saw feeding tonight were working from the safety of tunnels, occasionally putting out their noses but that was all. I suspect it's to do with population density which is thinning out now the voles are dispersing to new sites. I know there are still plenty of animals about - the banks are still volescaped and there are lots of fresh droppings and tidy burrows, prints and chopped or grazed vegetation. These signs will gradually disappear, though, as autumn progresses.

The practical upshot for this blog is that I don't think I'll be getting many more photos; the pictures of voles at the top are some of John Harding's, taken earlier this year. However, as I usually do, I'll be keeping an eye on this colony and the others over the winter and cataloguing the first field signs as they appear in spring. In general it's not been a bad year for water voles in Whitchurch, mainly because we don't experience the severe flooding many other sites have had across the country, and because we've managed to keep the mink out for another season. Long may it continue!
Posted by Kate at 12:03 No comments: