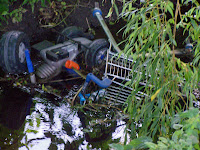 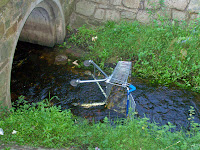 Three trolleys in one short stretch between the bridge and culvert - I can't tell you how disappointed I am that Tesco hasn't addressed this issue. Time to get the Environment Agency and the council involved, I think.
Posted by Kate at 12:56 No comments: 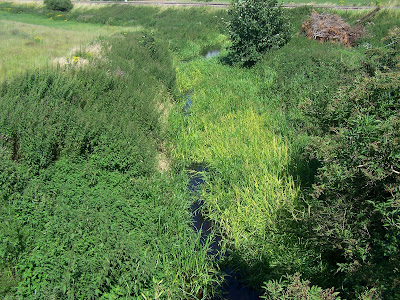 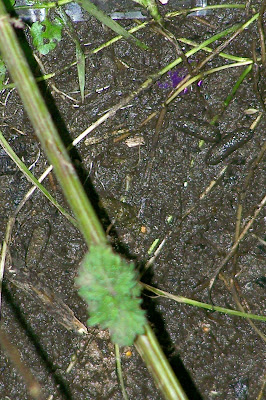 Because the weather's been so wet, riparian vegetation everywhere is lusher than I've ever seen it. Great news for voles: rubbish for vole-spotters. Yockings Gate's no go area now (see photo above) and trying to see anything on the banks near Tesco is like looking for a needle in a haystack. However, there are water voles about, as these droppings under the bridge show. There are also one or two places at White Lion Meadow (the Tesco car park stretch) that could well be feeding stations, only I can't get near enough to see. I hang over the bridge and watch the leaves quiver, and I don't know whether it's the wind, the water, an insect or what moving them. But I was speaking to a man there today who said he'd had several sightings in recent mornings. I suppose it's, as always, a matter of being in the right place at the right time.
Posted by Kate at 08:38 3 comments:

A fair few prints - not rat! - down at the far end of the car park stretch (near the road). I'd have gone and taken pictures, but it's raining, yet again.
Posted by Kate at 11:42 No comments: 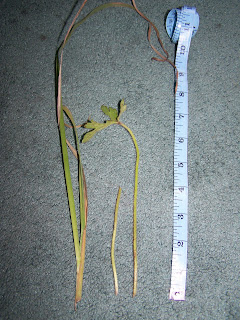 Had to take a circuitous route as some of the the back lanes were flooded. Nearly got lost in the wilds of Alkington! But there's still feeding going on in the ditches of the Moss - plus a whole heap of these warty little frogs.
Posted by Kate at 08:19 1 comment:

We're back, but we're shy 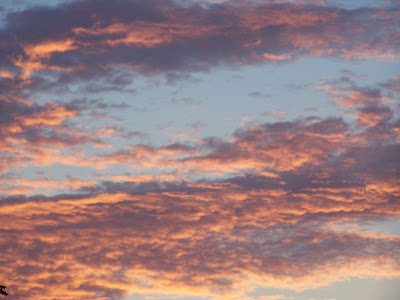 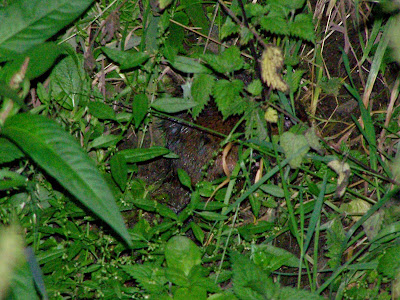 Sighting at White Lion Meadow, 9pm. How happy am I?

Whoo-hoo! Rosie saw one this afternoon!
Posted by Kate at 12:48 3 comments: 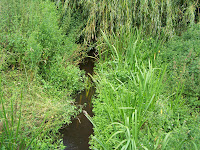 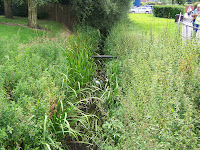 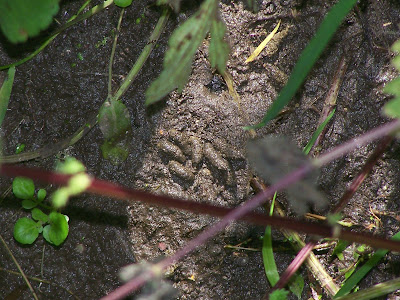 Rosie told me she'd seen what looked like a water vole latrine down at White Lion Meadow, which is the main car park for the town, by Tesco: the place this blog was originally supposed to be about. If you recall, the voles disappeared from this particular stretch, I suspect because they were driven away by rats. Some might have been eaten, others moved upstream.
.
But these do look to me like water vole droppings, and if they are, that means we have at least one breeding female back on the site. It's very hard to see what's going on along the banks because of the tremendously lush vegetation (I'm not complaining, you understand!). I'll be keeping a close eye on the brook here from now on, though.
Posted by Kate at 03:11 3 comments:

Been seeing voles all week at Yockings Gate, but no photos, alas.
Posted by Kate at 12:21 2 comments: 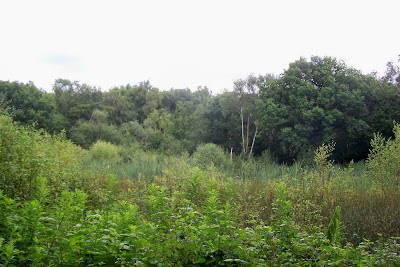 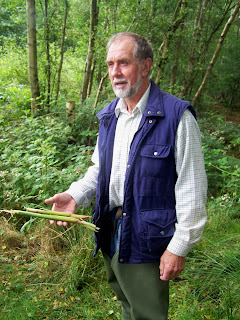 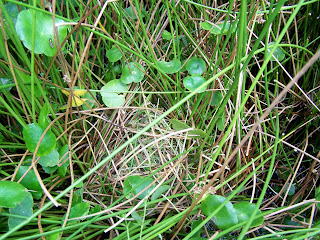 The water vole group went down to the nature reserve at Brown Moss today, which is on the Prees (south) side of Whitchurch. We looked at two pools specifically and found evidence of feeding, plus some latrines. The nest above, made of woven grass, we think may be field vole - there were lots of field vole signs around - but Albert (above) had seen a water vole one too which was similar in structure but bigger, about the size of a football.
.
Albert also found these giant pieces of cut reed; no chance of mixing those up with field vole activity!
.
Two voles this evening at Yockings Gate. Lots of movement in the reeds, too.
Posted by Kate at 05:46 2 comments: 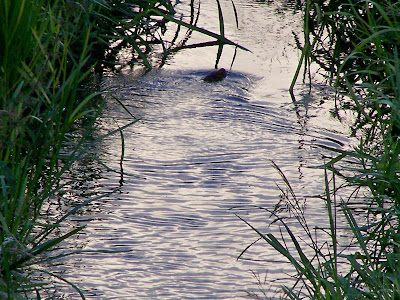 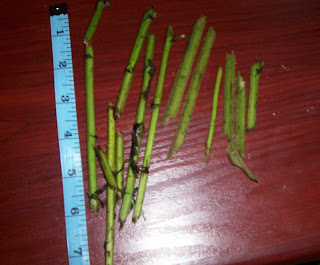 Another vole at Yockings Gate this evening, obligingly swimming up the centre of the brook for quite a distance.
.
Then I went to have a poke around the ditch between the canal and the A49 by Quoisley Bridge, because I've often driven past and thought it looked a likely spot. A path's been cut by a wide mower, but at the end of this section where the weeds have been left waist-high, there were two feeding stations. Given the scale of the pieces, I'd say these are definitely water vole and not field.
.
So a new area to keep an eye on. This makes up for the fact that I had a look the other day round Dearnford fishery and couldn't find any signs at all, despite the fact there were plenty of voles last year.
.
But colonies move around, and wax and wane, and an area that's not occupied this year might be full again the next (and vice versa).
Posted by Kate at 13:45 No comments: