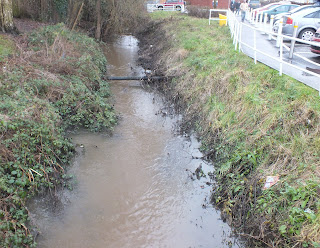 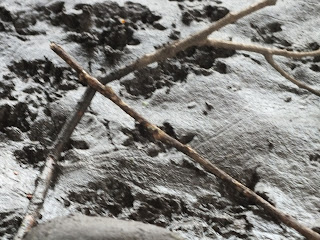 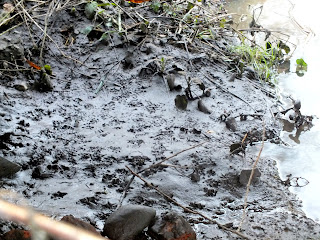 A peep under the bridge at White Lion Meadow (the main town car park by Tesco) reveals a lot of rodent activity under the bridge. There are certainly rat prints here, and mouse, but I'm moderately confident that some of these are water vole because of their starry shape. The two pawprints directly under the twig in the centre of the second photo look likely, for example.

The banks on this stretch of the brook are deep enough to keep the voles safe even if the water level rises a few feet, as long as they stay in their burrows and don't try to swim in the strong current.
Posted by Kate at 08:10 2 comments:

We're in the dead zone now as regards vole-watching. I don't expect to see much in the way of field signs till February, and no actual sightings of animals till the end of that month or even March/April. I worry, too, about the amount of rain that's come down lately, in case some of the burrows have been compromised and the voles made vulnerable.

However, we've had very wet winters before and the colonies always do seem to come back, so I'm just crossing my fingers as usual and counting the days till the spring. We're not too far away now.

In the meantime, let me direct you to Terry Whittaker's gorgeous blog, and remind you that his water vole photography workshops will be running in 2013.
http://terrywhittakerphoto.blogspot.co.uk/2012/12/water-vole-workshops-2012.html 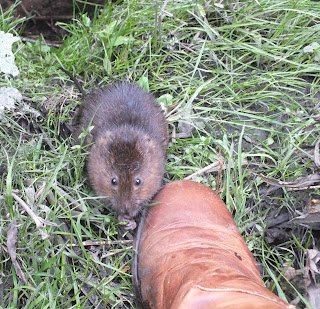