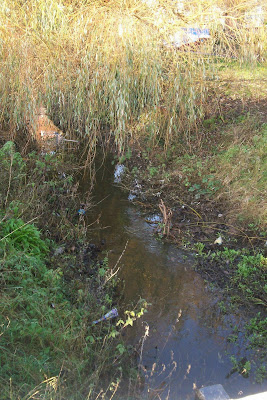 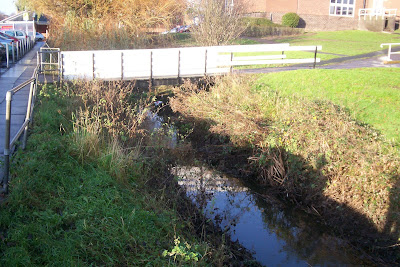 This is the diary of a brook: the Staggs Brook in Whitchurch, Shropshire, or, more specifically, the short stretch of the Staggs Brook that runs alongside White Lion Meadow car park, SY13 1BA.
2006 was a big year for this short length of stream. It was May 2nd when I spotted my first water vole of the season and was able to email Shropshire Wildlife with the news:
I thought you’d like to know there are definitely voles round the Tesco’s culvert right now. I spent ten minutes watching one tidy the entrance to its burrow this afternoon (2.45pm) before it plopped into the water and swam off. I’d crossed the bridge and turned left to see if there were any holes in the bank on the side nearest the car park. There were, and as I said, one contained a vole! So I’ll be checking the brook out at dusk when I get the chance.
Three days later I went to look again and was able to report this:

I went this evening, 9pm, and it was positively swarming with water voles! I’ve never in my life seen anything like it! There were big ones and little ones; I didn’t know where to point my binoculars. I began by trying to count them but I lost track. It was like a vole motorway.

News spread quickly and soon there were visitors on the bridge almost every evening watching the voles. Normally water voles are shyish creatures, on account of being at the bottom of the food chain - predators include cats, mink, pike, foxes, owls, otters, rats and heron. But because these ones had grown up at the side of a busy car park, they seemed not to be bothered by noise and you could go there most times of the day and be sure of seeing one. By evening they'd be out in force, swimming and feeding and occasionally fighting over territory.

The media began to take an interest and all summer there were articles in the Whitchurch Herald and the Shropshire Star, and features on local radio. In August the BBC came to film and the cameraman was amazed at how easy it was to obtain really good footage of what's normally a tricky animal to get on film.

So why the fuss about these water voles? Because they're Britain's most endangered mammal, and down to an estimated population of just 400,000. In several counties they're extinct, and wildlife groups are working like mad to try and reverse the decline before we lose them altogether.

We're amazingly lucky to have this colony right in the town centre where everyone can see them, and I want to use this blog to chart the progress of the voles during 2007. The Staggs Brook is a really special place.
Posted by Kate at 07:58