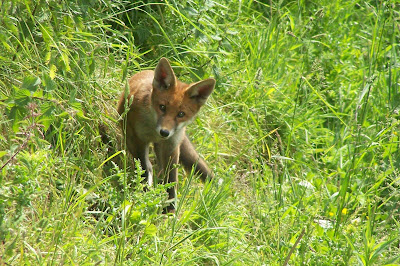 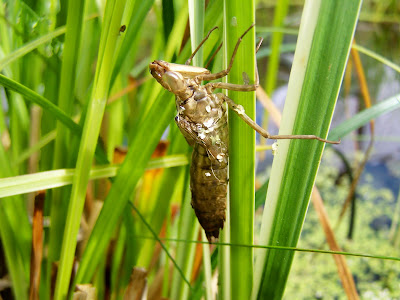 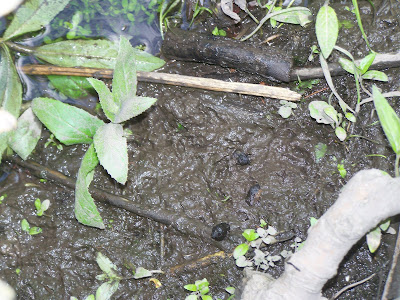 I don't know what's going on at White Lion Meadow. We've only had one sighting in the last month, and even taking into account the lushness of the vegetation, that doesn't seem right. I've found a little bit of feeding, and there's still the areas of squashed grass, but that's all.
.
So photos of actual voles may be hard to come by for a while. Instead I give you: w-v droppings from the ditch near Grocontinental; an empty dragonfly-larva case (exuvia) from my pond; and this young fox who waited patiently for me to sort my camera out before moving on. He may have been hoping for a bit of the apple I was eating!
Posted by Kate at 06:52

Excellent photos - especially of the fox.
Interesting on the lack of water voles though. It will be interesting to see if this just a blip or if there is semi-permanent.

It's happened before, in 2007, but that time we put it down to rats (I was seeing loads). however, no one's seen hide nor hair of a rat this year, so I just don't know what's happened. I suppose predation's most likely, or drowning.

I'll keep looking out, though, because as populations further up expand, they could well come back again. That's what happened in 2007.

I found absolutely loads of latrines in a different ditch this evening, but I'm not ready just yet to displace my fox for umpteen photos of poo!

Fox photo is gorgeous. He looks so interested in you! Foxes wouldn't be vole predators would they?

However, native redators are in the balance, and not too much of a problem. The big problem conservationists have is with American mink, and to a lesser extent, domestic cats. Those two non-native species have a terrible impact on water voles.

Foxes are omnivores, and will eat things like fruit and cheese if they can get them. A large part of their diet is minibeasts, eg worms.