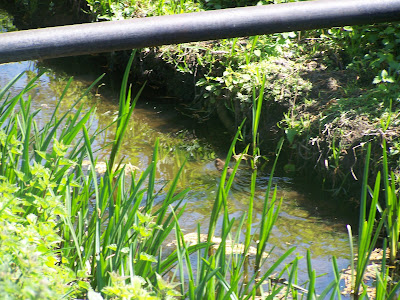 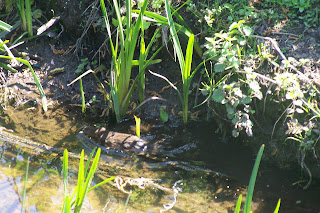 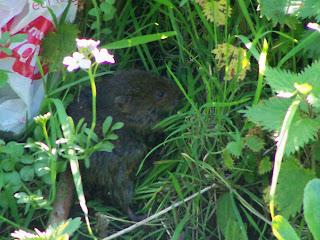 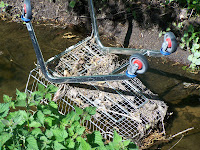 So I went in this morning to discuss the trolleys at the invitation of the new manager. I explained to him about water voles being desperately endangered, and about voles' habitat being protected by law, and about the unique situation of the brook with regard to the local community, and about the problem the trolleys were causing. Initially his response was to say they will fit grids to stop the trolleys being taken out of the car park. But that isn't going to help with the brook and I told him so. It's as if an engineer, asked to design a dam, proposed building a very nice summer house on the bank instead and insisted that would do the same job.
.
We talked at length and he seemed sympathetic. However, the decision isn't up to him. So he's going to ask the people in charge of this aspect of the stores, and get back to me. Can't say fairer than that, for now.
.
But oh, how frustrating to have been told by the previous manager that 'he was confident he'd be able to get the new trolleys by mid April' and now, apparently, be back to square one. Five months' dialogue wasted.
.
That aside, it's been a beautiful day and lots of passers-by were able to watch voles this afternoon at the bridge.
Posted by Kate at 08:14

This is a lovely blog Kate. Keep up the good 'trolley' fight!

Sorry about the trolleys. I've seen grids in action in St Ives. They inhibit rather than stop you getting the trolley out - if you want out you can get them out. There's also the bridge you can wheel them over where you are.

Lovely piccies, once again, though!

Yes, Dave, the grids are entirely unsuitable for protecting the brook, as was the partial railing of one side of the car park (even though I was assured it would help).

It will cost another stack of money to install grids, and to NO effect - as you say, the trolleys can just be wheeled over the bridge and out the far side of the car park to town (or into the water). The bridge can't be blocked off as there has to be wheelchair access.

I like your watervole photos! I never seem to have a camera at the right time. I saw lots of ducklings, a rabbit and loads of butterflies but no watervoles today!!!